Long-term cannabis use may be associated with negative cognitive effects such as brain fog, lowered motivation, difficulty learning, and inattention. However, such effects are typically reversible with tapered use, time off, and maintaining mindfulness of potential adverse effects.[13]

The genus cannabis is indigenous to central Asia and the Indian subcontinent.[14]

The word cannabis is from Greek κάνναβις (kánnabis) (see Latin cannabis), which was originally Scythian or Thracian.[18] It is related to the Persian kanab, the English canvas and possibly the English hemp (Old English hænep).[18]

Cannabis plants contain a number of different specific compounds at various ratios. Cannabis contains more than 460 compounds;[19] at least 80 of these are cannabinoids,[20][21] chemical compounds that interact with cannabinoid receptors in the brain.[22] The most common cannabinoids are listed below:

Cannabidiol acts as an allosteric modulator of the mu and delta opioid receptors.[29] THC also potentiates the effects of the glycine receptors.[30] However, the role of these interactions and how they result in the cannabis high remains subject to on-going scientific investigation.

Drugs that activate the CB1 and CB2 receptors are known to upregulate and enhance 5-HT2A receptor activity.[31] The ERK1/ERK2 signaling pathway has been shown to mediate this effect, but the exact biochemical mechanism is unknown. This upregulation and enhancement of the 5-HT2A receptor is why cannabis potentiates the effects of psychedelic drugs and can cause psychedelic effects in very high doses. 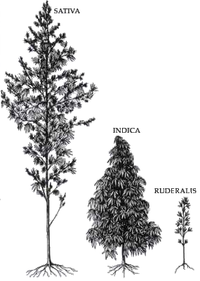 Cannabis is consumed in many different ways:[64]

Cannabis is an emerging treatment option for those suffering from many serious diseases, including cancer. Due to its pain relieving, nausea suppressing effects, cannabis can be useful for those undergoing radiation therapy and chemotherapy.[69] Oral doses of cannabis are more effective in reducing nausea and vomiting[70].

In addition to the anti-nausea effects, the appetite enhancement effects of cannabis can combine with the antiemetic effects and make it more likely that the patient will gain or maintain weight through cancer treatment.[71]

Cannabinoid hyperemesis syndrome (CHS) is recurrent nausea, vomiting, and stomach cramp that sometimes occurs due to prolonged, high-dose cannabis use.[73][74]

A NIH study found that suicide risk is higher with marijuana users than non-users. [76]

On the other hand, the largest study as of 2018 in association with cannabis use and the risk of suicide, there was no found evidence between the two. This study shows that it is unlikely a risk factor for suicide, either directly or as a consequence of use. [77]

Not only that, but another study studied the association between cannabis and suicidality also has correlation.[78]

The prolonged usage of THC and other cannabinoids may increase one's disposition to mental illness and psychosis,[55] particularly in vulnerable individuals with risk factors for psychotic illnesses (like a past or family history of schizophrenia).[79][80][56]

THC, the principal psychoactive constituent of the cannabis plant, has extremely low physiological toxicity and the amount that can enter the body through the consumption of cannabis plants poses no threat of death. In lab animal tests, scientists have had much difficulty administering a dose of THC that is high enough to be lethal. The dose of THC needed to kill 50% of tested rodents is very high,[83] 2.594 mol/kg, about 815.7 grams of THC per kilogram of body weight,[84] and human deaths from overdose are unheard of.[85]

It is worth noting that the rare condition Cannabinoid Hyperemesis Syndrome (CHS) can cause ongoing nausea, vomiting and severe dehydration which can lead to renal failure[86] and in the worst case this can lead to death.[87]

Cannabis is moderately habit-forming. Research has shown the overall dependence potential for cannabis to be less than that for caffeine, tobacco, alcohol, cocaine or heroin, but higher than that for psilocybin, mescaline, or LSD.[88]

Dependence on cannabis is more common amongst heavy users. Cannabis use can lead to increased tolerance[22][89] and withdrawal symptoms upon stopping usage.[27][90] Prolonged cannabis usage requires the user to consume higher doses of the substance to achieve a common desirable effect, and reinforce the body's metabolic systems for synthesizing and eliminating it more efficiently.[91]

Tolerance to many of the effects of cannabis develops with prolonged and repeated use. This results in users having to administer increasingly large doses to achieve the same effects. After that, it takes about 1 - 2 weeks for the tolerance to be reduced to half and 2 - 3 weeks to be back at baseline (in the absence of further consumption). THC has been detected in heavy cannabis users after 77 days of drug abstinence.[92]

One study found that about 1 in 10 users of cannabis may develop dependence characterized by the occurrence of a withdrawal syndrome after abstinence. This withdrawal syndrome was found to peak 2-3 days after quitting and is mostly complete by 1 week; however, sleep disturbances and vivid dreams may persist for 2-3 weeks.[93] 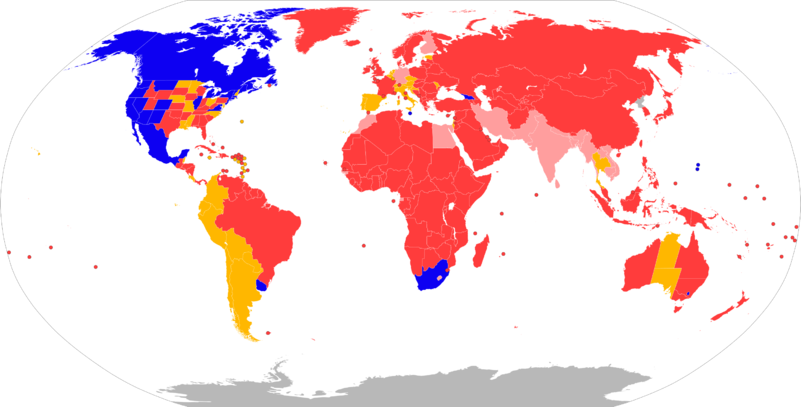 The legality of cannabis for medical and recreational use varies by country, in terms of its possession, distribution, and cultivation, and (in regards to medical) how it can be consumed and what medical conditions it can be used for. These policies in most countries are regulated by the United Nations Single Convention on Narcotic Drugs that was ratified in 1961, along with the 1971 Convention on Psychotropic Substances and the 1988 Convention against Illicit Traffic in Narcotic Drugs and Psychotropic Substances.[94][95]

The World Health Organization (WHO) is calling for whole-plant marijuana, as well as cannabis resin, to be removed from Schedule IV—the most restrictive category of a 1961 drug convention signed by countries from around the world.[96]

Sweden: Tetrahydrocannabinol is a controlled substance under the 1971 Convention on Psychotropic Substances[95]. However, it has been approved for medical use by the Swedish Medical Products Agency[97], in the form of an oral solution sold under the brand name Sativex.[98][99]