From PsychonautWiki
(Redirected from Opioid)
Jump to navigation Jump to search 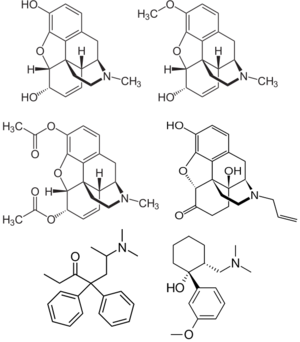 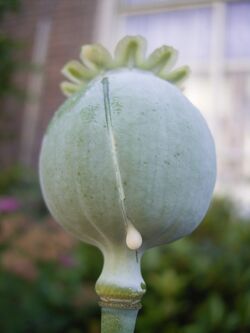 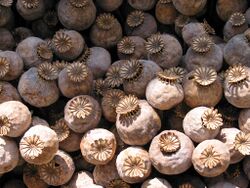 Dried pods for preparation of tea or solvent extraction of alkaloids

Opioids are a class of psychoactive substances that resemble morphine or other opiates in their pharmacological effects.[citation needed] Opioids work by binding to opioid receptors, which are found in the central and peripheral nervous system and the gastrointestinal tract.[citation needed] The receptors in these organ systems mediate both the beneficial effects and the side effects of opioids.

Although the term opiate is often used as a synonym for opioid, the term opiate is limited to drugs derived from the natural alkaloids found in the resin of the opium poppy (Papaver somniferum).[2] While opioid is a more general term for substances that act primarily on opioid receptors, including natural occurring alkaloids, synthetic substances and opioid peptides.[3]

Opioid dependence can develop with ongoing administration, leading to a withdrawal syndrome with abrupt discontinuation.[4] Opioids are not only well known for their addictive properties, but also for their ability to produce a feeling of euphoria, motivating some to use opioids recreationally.

Opioids are based upon morphine and opium-like structures. They work via their similar chemical structures to the endogenous opioids in the body. Morphine derived opioids, known as morphinans, contain a benzene ring attached to two partially unsaturated cyclohexane rings (phenanthrene) and a 4th nitrogenous ring attached to the core at carbons 9 and 13. There are several classes of opioids which differ greatly in structure from each other. For example, fentanyl and its analogues are structurally unique from morphinans and tramadol derivatives. 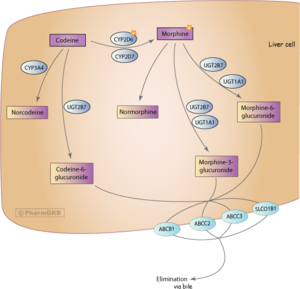 Metabolic pathway of codeine and morphine courtesy of Pharmgkb.org

Opioids are known to mimic endogenous endorphins. Endorphins are responsible for analgesia (reducing pain), causing sleepiness, and feelings of pleasure. They can be released in response to pain, strenuous exercise, orgasm, or excitement. This mimicking of natural endorphins results in the drug's euphoric, analgesic (pain relief) and anxiolytic (anti-anxiety) effects.[5]

Opioids act on the three main classes of opioid receptor in the nervous system, μ, κ, δ (mu, kappa, and delta).[6] Each opioid is measured by its agonistic or antagonistic effects towards the receptors, with the responses to the different receptor sub-types (e.g., μ1 and μ2) providing even more effects. Opioid receptors are found mainly within the brain, but also within the spinal cord and digestive tract.[7]

The delta receptor is responsible for the analgesia, antidepressant and convulsant effects as well as physical dependence.[6]

The kappa receptor is responsible for the analgesia, anticonvulsant, dissociative and deliriant effects as well as dysphoria, neuroprotection and sedation.[6]

The nociceptin receptor is responsible for anxiety, depression, appetite and development of tolerance to μ agonists.[8][9]

The zeta opioid receptor, also known as opioid growth factor receptor (OGFr) is responsible for tissue growth, neural development, and is further implicated in the development in some cancers.[10][11][12][13][14][15] The endogenous ligand for OGFr is met-enkephalin, which is also a powerful endogenous delta opioid receptor agonist.[16]

The short-term non-chronic use of opioids is not associated with any physical or neurological toxicity.[citation needed]

The long-term use of opioids causes hormonal imbalance in both men and women.[17] In men, this opioid-induced androgen deficiency results in abnormally low levels of sex hormones, particularly testosterone.[18]

Another often observed long-term effect is hyperalgesia, an increase in the pain sensitivity of the person. This is specially seen in chronic pain patients on high dose opioid regimes. There is some evidence that NMDA antagonists like ketamine and opoids that are also weak NMDA antagonist such as methadone, levorphanol and tramadol may help delay the onset of hyperalgesia or even revert it.[19]

Due to the highly euphoric nature of these substances, the recreational use and abuse of opioids has an extremely high rate of addiction and dependence. This is combined with a tolerance which builds up quickly, necessitates that the user take increasingly high dosages in order to get the same effects.

The risk of fatal opioid overdoses rise sharply after a period of cessation and relapse, largely because of reduced tolerance.[20] To account for this lack of tolerance, it is safer to only dose a fraction of one's usual dosage if relapsing. It has also been found that the environment one is in can play a role in opioid tolerance. In one scientific study, rats with the same history of heroin administration were significantly more likely to die after receiving their dose in an environment not associated with the drug in contrast to a familiar environment.[21]