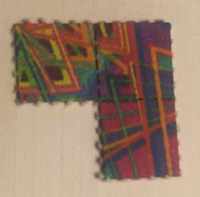 105μg blotters used for this experience

I have been fascinated by the use of entheogenic substances as tools to explore the human mind and consciousness for the better part of the past two years. I started doing serious research on psychedelics a few months before the start of 2018, eventually narrowing down on LSD, and finally spent a week planning out the circumstances and the objectives of my first trip. Knowing the importance of set and setting; the plan was to trip alone at my house, during the day, starting at about six o'clock in the morning.

Aside from regular cannabis use, this has been my first experience with a psychedelic drug.

I cleared the entire day for the trip so that there would be no distractions and I would have plenty of time for the trip itself as well as time to recover. I woke up to the sound of my alarm clock at 6:00 in the morning and had initially planned on ingesting the acid on an empty stomach, but was considerably hungry when I woke up so I ate two pieces of toast with blackberry jam. I washed my face, brushed my teeth, and took the initial dose of 105μg LSD on a single tab of blotter paper by 6:23 AM, approximately one hour before sunrise.

My heart began to race as soon as the paper hit my tongue--this was more excitement than nerves, but I quickly became very calm as I waited for the acid to dissolve until I swallowed the paper after about 15 minutes had gone by. This was the point of no return, no turning back now. ‘I just let one hundred and five micrograms of LSD dissolve in my mouth and swallowed the paper.’ Like unlocking a door and throwing away the key. I let this sink in for a moment, knowing that I was about to be completely at the liberty of my own subconscious or “Psychedelic Ego” for the next 8-10+ hours. As the late Terence McKenna never tired of pointing out, this guarantee of profound effect, for better or worse, is what separates psychedelics from every other method of spiritual inquiry.

I spent the next hour waiting anxiously for the effects to become apparent. I began to notice a mild body high and euphoria, but saw no immediate changes in perception or thought. I stepped outside my room and began wandering throughout the house, studying the environment. I noticed the shadow of a light fixture which appeared to be swaying back and forth against the wall, even though the lamp itself was completely still. This was about an hour into the trip and aside from some mild euphoria and hallucinations of shadows swaying and expanding, I otherwise seemed to be thinking clearly and felt somewhat “normal”. I was observing this environment that I interact with on a daily basis, from the perspective of being on a tour with my mind and the many tricks it’s capable of as the guide.

It was a very gentle ascent into the trip, I must have spent the next few hours walking around enjoying the visuals as they became more intense, and was reporting my observations to a friend I was speaking to on a voice call. This part of the trip was almost entirely extrospective, I was engulfed by the senses. I recall listening to “On the Beach” by Neil Young, running my fingers against the crisp texture of the paint on the walls while I watched as the world around me breathed and changed.

My mind was quiet. I wasn’t worried about anything and I was starting to get the idea that this is what it was all about; being present in the moment. I wanted to test this idea by creating what I considered to be the “perfect moment” for myself, and basking in it. So I made myself a cup of masala chai, loaded some very potent cannabis into my pipe, turned my music up and stepped outside. I sat down in my favorite chair on my patio and paused for a moment to take it all in. The piercing sun was presenting the most beautiful blue sky I had ever seen, with strips of clouds that looked like they had been painted on by a French impressionist. It was 15°C outside, the 32KPH winds were crashing into me with every gust, seemingly in synchronicity with my music. Without a doubt, I was sure I had created the perfect moment, and I was immersed in it. 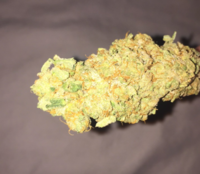 Perhaps in a lapse of judgement, I waited for the wind to pause, sparked my lighter and took a long toke on my pipe, followed by another to finish off the bowl. A few moments later I got up from my chair, laid down in the grass and looked up at the sky. I could feel every single blade of grass massaging against my skin. In a single instant I became aware of everything that had led me to this moment. My senses and my consciousness seemed vitally linked. I felt alive and vibrantly awake with everything I had. I was completely unaware of my body yet I was overwhelmed with a euphoric cocktail of sensory and emotion, it brought tears to my eyes. I was crying harder than I ever had before. I was crying harder than I did during the saddest moments of my life, and it was because I was so happy. I was grinning like an idiot, sobbing uncontrollably, and laughing, because for that moment I think I felt what I could only describe as absolute love and understanding.

The more extrospective the trip became, the more in tune I was with my senses, the more I was able to be aware of the moment I was in--which is to say the more I became aware of existing. As soon as I caught on to this, my mind was suddenly racing and my blissful moment had ended. I stepped back inside and the extrospection instantaneously turned to seemingly infinite introspection as though someone had flipped a switch. It then dawned on me that what I might be experiencing was akin to what some have described as an “Ego-Death”.

This term is troubling to me. It is a linguistic paradox, which in my case induced a terrifying, seemingly endless thought loop upon asking myself the question; “Who is it that seeks to destroy the ego?” I came to the idea that the ego is something created when we attach a thought, sense, or a memory of an experience to oneself (self meaning a conscious physiological organism). So to say that “I” had this incredible moment of absolute bliss during which there was no ego present, seemed almost insulting--because if there is no ego, then who just had this experience?

With that in mind, it would seem to be that the experience itself of having an “ego-death” is the ultimate reassurance of the existence of an ego, contrary to the linguistic implications of the term. If ego is something we create by attaching a thought, sense or a memory of a moment to oneself, thereby marking the end of that moment; what happens when we try to attach a moment of egolessness to oneself?

I spent the next 2-3 hours in an endless game of tug-of-war between this state of egolessness and my ego which was trying to process what just happened. I was beginning to think I had lost my mind, which of course caused me to get the idea that I might be having a “bad trip” which sparked another thought loop over questions such as “Who is tripping right now?” “What makes a good trip vs a bad trip?” “If there is no ego, then who is going to come down from this trip?”

The loops continued, and the concern I was having for being in the uncontrollably terrifying state was producing more concern because I was concerned which produced concern that I would never come back from this state which I was concerned about which lead me to ask myself again “Who is in this state?” and it happened over and over again like that. Which is a definition of insanity, to repeat the same task over and over and again expecting different results.

By a certain point I began to get the idea that each step of this psychedelic experience, each phase of this “ego-death” was part of a larger process. The initial moment of egolessness I experienced birthed the awareness of this happening and thus the awareness of an ego, as it is the ego that is aware of the happening.

A series of involuntary thought loops and caused by the paradoxical validation of an ego after experiencing a state of egolessness is what lead to the final dissolution of the external ego and thus the understanding that the polarity between ego and egolessness defines existence itself. As Ramana Maharshi said, the question ‘Who am I?’ is not really meant to get an answer, the question is meant to dissolve the questioner.

This I believe is the state often referred to in psychedelic culture as “oneness with the universe”. Wherein it is possible to reach the understanding and feeling of singularity between the constructed ego and the underlying constant of existence which lies beneath.

Once I came to understand this, I was finally able to return to the present moment and quiet my mind again. It was during this time which was the comedown that I was also experiencing the most apparent fractal visuals of the entire trip. I was listening to classical music and Alan Watts lectures, which brought me peace and comfort as he seemed to be able to explain everything I had been struggling to put into words.

This experience taught me that it wasn’t about what I wanted to go in and ‘get’ from the experience. It was about redefining who ‘I’ am altogether. I also know now that going into these states is not about recording what you can of them so that you can explain it all to yourself when you come back down. It’s an awakening of sorts. You come to understand that the ego is something that is birthed from a state of egolessness. So being in the psychedelic moment is to be without the ego. To try to understand is to have the ego present.

So my objective now, when re-entering this headspace is to be completely present in the moment it provides. In Hinduism, this is called Sacchidānanda, which represents “existence, consciousness, and bliss” or “truth, consciousness, bliss" and is an epithet and description for the subjective experience of the ultimate, unchanging reality, Brahman.