From PsychonautWiki
Jump to navigation Jump to search
For the coffee plant, see Coffea (botany).

1,3,7-Trimethylxanthine (also known as caffeine) is a naturally-occurring stimulant substance of the xanthine class. Notable effects include stimulation, wakefulness, enhanced focus and motivation. It is the most widely consumed psychoactive substance in the world.

Caffeine is found in varying quantities in the seeds, leaves, and fruit of some plants where it acts as a natural pesticide, as well as enhancing the reward memory of pollinators.[2][3][4] It is most commonly consumed by humans in infusions extracted from the seed of the coffee plant and the leaves of the tea bush, as well as from various foods and drinks containing products derived from the kola nut.[citation needed]

Unlike many other psychoactive drugs, caffeine is legal and unregulated in nearly all parts of the world. Beverages containing caffeine, such as coffee, tea, soft drinks, and energy drinks, enjoy great popularity. Caffeine is the most commonly used drug in the world, with 90% of adults in North America consuming it on a daily basis. Global consumption of caffeine has been estimated at 120,000 tonnes per year, making it the world's most popular psychoactive substance. This amounts to one serving of a caffeinated beverage for every person every day.[5]

Caffeine, or 1,3,7-trimethylpurine-2,6-dione, is an alkaloid with a substituted xanthine core. Xanthine is a substituted purine comprised of two fused rings: a pyrimidine and an imidazole. Pryimidine is a six-membered ring with nitrogen constituents at R1 and R3; imidazole is a 5 membered ring with nitrogen substituents at R1 and R3. Xanthine contains oxygen groups double-bonded to R2 and R6. Caffeine contains additional methyl substitutions at R1, R3 and R7 of its structure. These are bound to the open nitrogen groups of the xanthine skeleton. It is an achiral aromatic compound.

The xanthine core of caffeine contains two fused rings, a pyrimidinedione and imidazole. The pyrimidinedione in turn contains two amide functional groups that exist predominantly in a zwitterionic resonance the location from which the nitrogen atoms are double bonded to their adjacent amide carbons atoms. Hence all six of the atoms within the pyrimidinedione ring system are sp2 hybridized and planar. Therefore, the fused 5,6 ring core of caffeine contains a total of ten pi electrons and hence according to Hückel's rule is aromatic.[6]

Pure anhydrous caffeine is a bitter-tasting, white, odorless powder with a melting point of 235–238 °C. Caffeine is moderately soluble in water at room temperature (2 g/100 mL), but very soluble in boiling water (66 g/100 mL). It is also moderately soluble in ethanol (1.5 g/100 mL). It is weakly basic (pKa of conjugate acid = ~0.6) requiring strong acid to protonate it. Caffeine does not contain any stereogenic centers and hence is classified as an achiral molecule.[7]

In the absence of caffeine and when a person is awake and alert, little adenosine is present in (CNS) neurons. With a continued wakeful state, over time adenosine accumulates in the neuronal synapse, in turn binding to and activating adenosine receptors found on certain CNS neurons; when activated, these receptors produce a cellular response that ultimately increases drowsiness. When caffeine is consumed, it antagonizes adenosine receptors; in other words, caffeine prevents adenosine from activating the receptor by blocking the location on the receptor where adenosine binds to it. As a result, caffeine temporarily prevents or relieves drowsiness, and thus maintains or restores alertness.[8]

The principal mechanism of action of caffeine is as a nonselective antagonist at the adenosine A1 and A2A receptors. During waking periods, the brain levels of the neurotransmitter adenosine steadily increase and trigger fatigue and sleepiness. The caffeine molecule is structurally similar to adenosine, which enables it to bind to adenosine receptors on the surface of cells without activating them, thereby acting as a competitive inhibitor.[9]

Alongside this, caffeine also has effects on most of the other major neurotransmitters, including dopamine, acetylcholine, serotonin, and, in high doses, on norepinephrine,[10] and to a small extent epinephrine, glutamate, and cortisol. At high doses, exceeding 500 milligrams, caffeine inhibits GABA neurotransmission. Caffeine's GABA reduction results in an increase in anxiety, insomnia, heart rate and respiration rate at high dosages.

Caffeine from coffee or other beverages is absorbed by the small intestine within 45 minutes of ingestion and distributed throughout all bodily tissues. Peak blood concentration is reached within 1–2 hours. It is eliminated by first-order kinetics. Caffeine can also be absorbed rectally, evidenced by suppositories of ergotamine tartrate and caffeine (for the relief of migraine) and of chlorobutanol and caffeine (for the treatment of hyperemesis). However, rectal absorption is less efficient than oral: the maximum concentration (Cmax) and total amount absorbed (AUC) are both about 30% (i.e., 1/3.5) of the oral amounts.[11]

Caffeine is an antagonist of adenosine A2A receptors, and knockout mouse studies have specifically implicated antagonism of the A2A receptor as responsible for the wakefulness-promoting effects of caffeine. Antagonism of A2A receptors in the ventrolateral preoptic area (VLPO) reduces inhibitory GABA neurotransmission to the tuberomammillary nucleus, a histaminergic projection nucleus that activation-dependently promotes arousal. This disinhibition of the tuberomammillary nucleus is the downstream mechanism by which caffeine produces wakefulness-promoting effects. Caffeine is an antagonist of all four adenosine receptor subtypes (A1, A2A, A2B, and A3), although with varying potencies. The affinity (KD) values of caffeine for the human adenosine receptors are 12 μM at A1, 2.4 μM at A2A, 13 μM at A2B, and 80 μM at A3.[12] 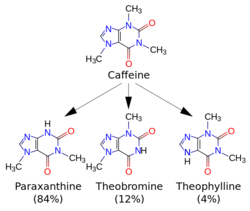 Caffeine is metabolized in the liver by the cytochrome P450 oxidase enzyme system, in particular, by the CYP1A2 isozyme, into three dimethylxanthines,[13] each of which has its own effects on the body:

Caffeine is not known to cause brain damage, and has an extremely low toxicity relative to dose. There are relatively few physical side effects associated with caffeine exposure. Various studies have shown that in reasonable doses in a careful context, it presents no negative cognitive, psychiatric or toxic physical consequences of any sort.

Extreme overdose can result in death.[20][21] The median lethal dose (LD50) given orally is 192 milligrams per kilogram in rats. The LD50 of caffeine in humans is dependent on individual sensitivity, but is estimated to be about 150 to 200 milligrams per kilogram of body mass or roughly 80 to 100 cups of coffee for an average adult.[22] Though achieving lethal dose of caffeine would be difficult with regular coffee, it is easier to reach high doses with caffeine pills, and the lethal dose can be lower in individuals whose ability to metabolize caffeine is impaired. 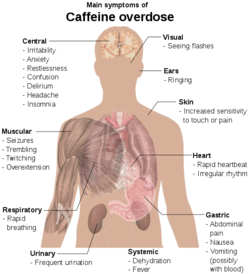 Caffeine produces dependence with chronic use and has a low abuse potential. When dependence has developed, cravings and withdrawal effects will occur if one suddenly stops their use.

Tolerance to many of the effects of caffeine develops with prolonged and repeated use. This results in users having to administer increasingly large doses to achieve the same effects. After tolerance has developed, it takes about 3 - 7 days for the tolerance to be reduced to half and 1 - 2 weeks to return to baseline in the absence of further consumption. Caffeine presents cross-tolerance with antagonists adenosine receptors, meaning that after the consumption of caffeine certain stimulants such as theacrine and theobromine will have a reduced effect.

Withdrawal symptoms – including headaches, irritability, inability to concentrate, drowsiness, insomnia, and pain in the stomach, upper body, and joints –- may appear within 12 to 24 hours after discontinuation of caffeine intake, peak at roughly 48 hours, and usually last from 2 to 9 days.[23] Withdrawal headaches are experienced by 52% of people who stopped consuming caffeine for two days after an average of 235 mg caffeine per day prior to that.[24] In prolonged caffeine drinkers, symptoms such as increased depression and anxiety, nausea, vomiting, physical pains and intense desire for caffeine containing beverages are also reported. Peer knowledge, support and interaction may aid withdrawal.

There is limited evidence that caffeine, in high doses or when chronically abused, may induce psychosis in normal individuals and worsen pre-existing psychosis in those diagnosed with schizophrenia.[25][26] Caffeine has been shown to potentiate the effects of methamphetamine, which can also induce psychosis.[27][28]

Caffeine is legal in nearly all parts of the world. However, it is often regulated because it is a psychoactive substance. For example, in the United States, the Food and Drug Administration (FDA) restricts beverages to contain less than 0.02% caffeine.[29] unless they are listed as a dietary supplement.[30]