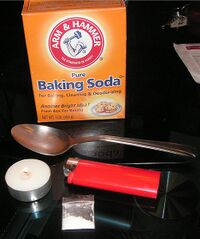 The most potentially harmful physical effects of cocaine appear to be not neurological but cardiovascular. Severe cardiac adverse events, particularly sudden cardiac death, become a serious risk at high doses due to cocaine's blocking effect on cardiac sodium channels.[8] Moreover, long-term cocaine use may result in cocaine-related cardiomyopathy.[18]

Susceptible individuals have died from as little as 30 mg applied to mucous membranes, whereas addicts may tolerate up to 5 grams daily.[19]

Cocaine has a similar potential to induce temporary psychosis[20] with more than half of cocaine abusers reporting at least some psychotic symptoms at some point.[21]

Typical symptoms of sufferers include paranoid delusions that they are being followed and that their drug use is being watched accompanied by hallucinations that support the delusional beliefs.[22] Delusional parasitosis with formication ("cocaine bugs") is also a fairly common symptom.[22]

Cocaine-induced psychosis shows sensitization toward the psychotic effects of the drug. This means that psychosis becomes more severe with repeated intermittent use.[23]