An accurate representation of how text may appear within a dream.

A lucid dream is any dream in which one is aware that they are dreaming. This is a well-established phenomenon that can occur during normal sleep. Various techniques can be learned to consistently induce lucid dreams at will. These techniques can be utilized as a powerful method of consciousness exploration, making lucid dreaming an important field of psychonautics. This article serves as a descriptive and comprehensive breakdown, analysis, and instructional guide regarding dreams and the behavior of their general content, their inherent limitations, and the skill sets necessary to consciously utilize them as powerful methods of self-exploration.

Despite powerful senses of delirium and plot acceptance, there are moments within dreams in which a person becomes aware of the fact that they are dreaming, allowing one to control the dream and its circumstances. These are known as lucid dreams: any dream in which, for an uninterrupted and prolonged amount of time, one is consciously aware that they are dreaming.

This section focuses on gaining a stabilized sense of lucidity within one's own dreams, as well as the techniques for utilizing and harnessing specific control and navigation techniques once this has been achieved.

One of the biggest hurdles that many encounter when learning to lucid dream is recalling what their dreams are about. This is easily changed and does not indicate an inability to dream, but simply means that the dreamer's brain does not focus any attention on memorizing them once they are over. The most effective methods of improving memory recall are listed below: 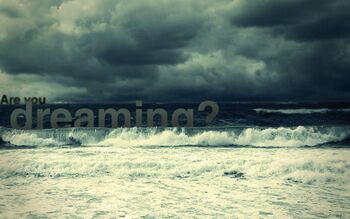 Changing one's desktop wallpaper to this image as a reminder to perform reality checks will greatly improve one's sense of general lucidity.

To determine whether or not one is dreaming, it is necessary to develop a habit of performing frequent reality checks. A reality check involves asking questions such as "Am I dreaming?" or "Is this a dream?" while performing a specific action which is capable of determining whether one is awake or dreaming.

Because most people are not in the habit of asking themselves "Am I dreaming?" while in the midst of a dream, it is necessary to get oneself into the habit of questioning reality to achieve a state of lucidity throughout them. By training oneself to habitually question reality during waking life, the habit will eventually carry over to dreaming life and, ultimately, one will find themselves posing the question while dreaming. When this happens, the odds of realizing one is in a dream, as well as the odds of achieving lucidity, increase greatly.

Listed below are some simple reality checks that can all be used to reliably and effectively determine whether or not one is currently dreaming:

An excellent way to remind oneself to perform reality checks is to put notes containing messages such as "are you dreaming?" or "perform a reality check" in places which one frequently looks at throughout the day. For example, putting a visible note by or on one's computer screen(s), writing a message on one's hand, or changing one's desktop wallpaper to the image found on the right (or something similar) will greatly improve general lucidity.

Once lucidity has been achieved, the dreamer will usually have a tendency to become very excited as the realization that one is dreaming washes over them. This flood of emotions rapidly results in dream destabilization and quickly causes the setting to begin to collapse in on itself, and the dreamer either wakes up or falls unconscious before losing lucidity and finding themselves back within another dream.

This can be extremely frustrating but easily overcome through the simple stabilization technique of maintaining sensory input through the basic action of rubbing one's hands together. This technique keeps the dream perfectly stable and grounded. This can be further taken advantage of by continuously rubbing one's shoulder with their hand to maintain sensory input while walking around and admiring or exploring the environment.

The effect of lucid destabilization does not occur to all lucid dreamers and as a result has lead some to believe that the effect may be a placebo effect.

Once lucidity has been gained and the dream has been stabilized, the dreamer can now begin to practice taking control of the dream and exploring their own mind. Through the power of expecting an action or task to work, anything is possible within the dreamscape and this can allow for some truly incredible experiences in which the only limit is one's imagination. The most common of these actions and the techniques used to achieve them are listed below:

Most lucid dreamers practice specific techniques that aim to increase their chances of becoming lucid. The efficacy of some techniques, mainly MILD, could be no more than a placebo, however they do work for most lucid dreamers. It is important to remember when attempting a technique that some techniques work better for some people whilst others do not. It is important to experiment with different techniques to find what works best for you. However with most things in life, for the techniques to be effective it requires patience. Try to avoid switching between techniques more than once a month as you could potentially spoil your progress on a certain technique, even if you have had no results yet. It is also possible to combine techniques, however beginners are recommended to stick to one and get good at it.

The most fundamental component of any dream or hallucinatory state can be defined as some form of perceivable sensory input. This differs from everyday sensory input in that it is received from an internal source created by one's own mind, as opposed to an external source within the immediately perceivable surrounding environment. The dreamscape of a human being is capable of manifesting completely realistic, convincing, and detailed equivalents of all five senses across varying degrees of vividness and intensity.

Internally sourced sensory input can be broken into five differing levels of clarity which are broken down and defined below:

With regards to the perspective in which dreams are perceived, just like literary plots, dreams can be experienced through four alternate vantage points which are described and listed below:

At level 4 - 5, dreams consistently manifest themselves through the essential component of extremely detailed imagined landscapes, locations, and sceneries of essentially infinite variety. These environments act as the setting in which the plot of the dream occurs. The geography of these settings is capable of rendering itself as static and coherent in its organization, but will usually result in a non-linear, nonsensical, and continuously changing layout which does not typically obey the rules of everyday physics. In terms of the chosen location, appearance, and style of these settings, they seem to be selected at random and are often entirely new and previously unseen locations. They do, however, play a heavy emphasis on replicating and combining real life locations stored within the dreamer's memories, especially those which are prominent within one's life and daily routine.

Within the settings themselves, relevant and irrelevant objects or props will be placed in seemingly appropriate or inappropriate locations throughout them. These can be interacted with in exactly the same way that any real life object can, but can often react in unexpected and spontaneous ways (although they usually behave exactly as the dreamer expects them to).

Across the setting of almost any dream, the scenery is inhabited and populated by conscious dream characters who can be spoken to and communicated with in extreme amounts of detail. These entities appear to be the inhabitants of a perceived independent reality -- they are expectant of one's appearance and interact with the dreamer in various ways.

Regarding their appearance, dream characters can show themselves as literally anything, but will usually display themselves as perfectly ordinary people. These people are equally likely to be complete strangers or randomly selected people which the dreamer has encountered throughout their life. The more prominent and emotionally significant the person is, the more likely they are to be encountered within the dreamscape.

There are distinctly different types of dream characters which one may encounter, each of which represents a particular subsection of one's own consciousness through both their visible form and their personality. These can be broken down into three separate categories:

When communicated with through spoken word, the level of coherency in which these entities can reply varies greatly, but can be broken down into four distinct levels of communication:

Each of the above components is randomly shuffled and spliced into any number of an essentially infinite variety of potential plots and scenarios. These may be positive or negative to experience and are difficult to define in a comprehensive manner, in much the same way that we cannot predict the plot of abstract literature and films. They can, however, be broken down into extremely basic occurrences which generally entail visiting some sort of setting(s) which contains within it interactive lone or multiple dream characters. Alongside these, unpredictable plot devices and events force the dreamer into becoming involved within the specific scenario of the particular dream.

These scenarios and plots can be linear and logical, with events that occur in a rational sequence which lead into each other through cause and effect. They are equally likely, however, to present themselves as completely nonsensical and incoherent, with spontaneous events that are capable of starting, ending, and changing between each other repeatedly, randomly, and in quick succession. The plots themselves can either be entirely new experiences that are unlike anything experienced within the real world, old experiences such as accurate memory replays, or a combination of the two.

Regarding the amount of time in which they are experienced, hallucinatory dream plots and scenarios usually feel as if they are being experienced in real-time. This means that when 20 seconds have been felt to have passed within the hallucination, the exact same amount of time will have passed in the real world. At other points, however, distortions of time can make themselves present, resulting in plots and scenarios that can feel as if they last days, weeks, months, years, or even infinitely long periods of time.

An important part of any dream that contains obviously unlikely and absurd scenarios is a strong sense of uncontrollable and powerful plot acceptance. This sense of plot acceptance allows the dreamer to accept any plot as it comes as a completely real event in which the results of one's own actions will have genuine consequences regarding the dreamer's life. This delirium motivates the dreamer to avoid danger, solve puzzles, and accept the scenario as reality even if it is clearly and undeniably more likely to be a dream than an event which could never occur within waking life. It is also possible in some anecdotal cases for a dreamers thoughts inside the dream to shape the dream, however this is not common.