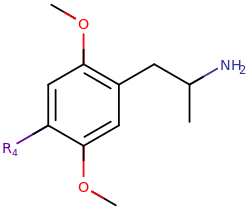 The generic structure for a DOx compound

Substituted dimethoxyamphetamines (also known as DOx) refers to a class of psychedelic amphetamines originally synthesized and documented by Alexander Shulgin in his investigation of psychoactive phenethylamines in the 1970s. Shulgin later published his findings along with other mescaline-derived compounds in his semi-autobiographical book/organic synthesis reference PiHKAL ("Phenethylamines I Have Known and Loved")[1].

The DOx compounds are highly potent, dose-sensitive, and long-lasting substances which are considered considerably more intense and challenging to use than their counterpart 2C-x analogs as well as the serotonergic lysergamides. The effects of DOx are comprised of strong visuals and an intense body load that is typically accompanied by marked physical and mental stimulation that can persist well past the main duration of its effects (prolonged residual stimulation).

Notably, they are one of the few classes of psychedelic chemicals (the other being the 25x-NBOMe series and the serotonergic lysergamides) potent enough by weight to be laid onto and distributed on blotter paper, where it is has a history of being sold as a substitute for genuine LSD, being significantly easier to produce. On the street, they are notorious for their distinctly bitter taste as well as their unusually long come-up period (which can take up to 3-4 hours before its main effects even begin to present themselves), which has sometimes led inexperienced LSD users to prematurely conclude that their tabs must be weak or from a "bunk batch" and then take more to try to compensate; this has led to a number of accidental overdoses and unpleasant and overwhelming experiences when the substance's effects finally do take hold.[2]

All derivatives of 2,5-dimethoxyamphetamine have a amphetamine backbone with two methoxy groups in positions 2 and 5 of the aromatic ring and they further contain different lipophilic substituents in position 4.

Other compounds, derivated from 2,5-dimethoxyamphetamine

The DOx compounds, as with many other serotonergic psychedelics, should not be taken in combination with SSRIs (selective serotonin reuptake inhibitors) or tricyclic antidepressants in general to avoid serotonin syndrome, a potentially life-threatening condition in which an excess of serotonin builds up past the body's ability to catabolize it (i.e. "break it down"), which can lead to many physical and cognitive health problems. Also, an oft-observed phenomenon of the DOx chemicals is that they have an extremely long onset time relative to other psychedelics (which could prompt users to redose early and repeatedly, potentially causing a drug overdose[2]).