I was staying in a cheap motel. Because I am uniquely ADHD, I just finished regularly using amphetamine on a schedule for about a month and decided to experiment with meth because of its United States government prescription for ADHD as Desoxyn. As expected with an amphetamine regimen, I healthily ate, took a multivitamin, exercised every single day with small weights and body exercises, and got good sleep up until this event. I wrote some of this report while still high and hallucinating.

March 2, ~7:30 p.m. - I just tried meth.  I snorted it twice Sunday and snorted it repeatedly every few hours as I stayed up all night Monday until I snorted a line at 7:30 p.m.  I had been wondering about the existence of black wiggly acetylcholine visuals poking out a centimeter or two from the corners of my coat hanger rack for a good hour, and they died down for a bit, so I snorted 45 mg.  I got charged by a one meter tall black spinning wire monster shaped like the Interactive Buddy as I walked around my bed.  I walked around my bed after doing that line, and I see him standing there with arms outstretched 45 degrees toward the ground, and then he raised his right arm and pointed it at me.  This was in slow motion like my adrenaline was being impacted. He charged right through me, then I turned and watched him dance and fade smoothly into my backpack in the corner.  I actually picked up the backpack and looked behind it because it was so realistic, and I saw nothing.  I then sat down and within a minute, I saw about 40 realistic black and very slightly rainbow black widow spiders charging me from all sides in waves for about an entire hour.  Each wave took about one or two seconds to reach me before they instantly reappeared back from the wall about four meters away.  They were each about a half meter in diameter.  I tried to focus on my computer because it really sucked as my cells were penetrated and annihilated by the unhampered dopamine efflux.  I see bugs crawling all over in the carpet and faces swirling.  I'm getting briefly touched on the back of my neck, on my leg, and all over my body.  I did some research while being attacked by hallucinations, and it was probably in part due to my M1 muscarinic receptor being dogged by excessive dopamine output. There were definitely many more mechanisms touched, but it is difficult to find research regarding the matter. https://www.researchgate.net/publication/5328973_Blockade_of_M1_muscarinic_acetylcholine_receptors_modulates_the_methamphetamine-induced_psychomotor_stimulant_effect 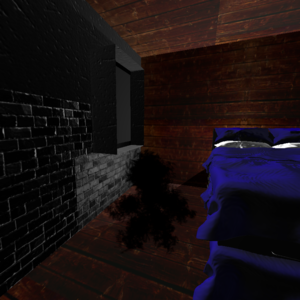 Adrenaline and Other Unknown Mechanisms Hallucinations

March 3, 7:00 a.m. - I saw a 2D (but sometimes morphing in 3D ways) black entity in my carpet reminiscent of a cartoon 30's gangster I decided to call Mr. Homie.  He had a suit, hat, and flat top sunglasses, and was about 20-25 cm tall.  Mr. Homie had the power to paint 40+ variations of something onto my vision, and by that I mean he reacted to the things being painted, and he also reacted to me.  He appeared to be some kind of cerebral cortex manifestation reacting to my normal prefrontal cortex thoughts as I walked around my apartment.  I remember seeing a Salamence before it was butchered and transfigured into something homosexual and violent.  The gay stuff was something like Meatwad from Aqua Teen shaking his ass in the intro of the last season of Aqua Teen, or it could be two shadow dudes/animals/monsters fucking.  I hypothesize there are some connections in my brain that are opened by a lack of choline driven by the M1 receptor I mentioned, allowing the cerebral cortex to bring info from the hippocampus and place it into the ocular electrical feed before it arrives at the prefrontal cortex for analysis.  There are definitely also some hormones involved with sex that are negatively affected. It could feed memories to Mr. Homie like hold up a cheeseburger to show me I should eat because my body was hungry.

I was very noticeably surprised and astonished by my hallucinations at every turn. Because of this surprising result, it looks like GABA neurons can become addicted to one's own dopamine supply, and it is known that GABA withdrawal can be deadly. Everywhere I looked, spiders and bugs were already there, and they were realistic 3D moving entities. These entities were up to a meter in diameter and were rapidly squirming on the ground like they were dying. Often times they were upside down dying spiders that would occasionally leap at me. They were formed of swirling black lines, some small enough to create a realistic entity while others were meter wide chaotic swirling lines. I could not hear them; lack of glutamate allows that auditory hallucinatory connection to come to my prefrontal cortex if I'm to believe my many dissociative experiments. Alternatively, perhaps severing some other connection makes it impossible to hallucinate many sound frequencies at all. When I got close to the hallucinations or when they jumped at me, they always faded out about 1/3 meters or less from my eyes.  Mr. Homie was working to scare me because I fucked my amp shit and fucked myself over with meth, but I can't be scared. Mr. Homie kept taunting me, laughing, and making gay shadow caricatures.

March 3, ~7:00 p.m. - At one point for a period of about five minutes, I blacked out and started telling delusions of my best friends I had fucked up and tried meth. I blacked in and was surprised that nobody was there with me in my room. I was blacking in and out for about thirty minutes, and that brief period of about thirty minutes I was worried then that I would do something stupid like the people that act like rabid monkeys on the news. These hallucinations lasted about 24 hours as the dopamine probably had no natural mechanism to be removed from its destructive, unnatural place in various acetylcholine and hormonal synapses. It took until about 7:00 a.m. the next day for the hallucinatory experience to be over. I actually felt mostly fine after the experiment, but that damage is definitely irreversible.

March 4, 7 a.m. - I forgot to pay my motel bill that day while I was tripping, so I was locked out. I was blacking in and out while waiting for the office to open and walking my dog in circles for about two hours. My goal was not to do anything stupid like typical homeless man or Florida man. This time is about as hazy as my talks with the friends that weren't actually there, and I got pissed and paranoid so I threw a bag of dog shit sometime around the time of getting a key for my room. Then I woke up in my bed to the motel employees banging on my door explaining I had to leave.

I'm never using meth again because it irked me from the moment I used it, just like Vyvanse. I don't like the excessive DA to NE ratio, nor the sigma 2 (shiny specs in vision like 3-MeO-PCE?) activation and the serotonin release. I snorted it over 5 days, and I stayed up 58 hours straight. When I peed, the smell was of putrid chemicals and lingered in my bathroom for a few days. The acetylcholine problem snuck up on me again like when I tried using MDA to fix immediate amphetamine withdrawal, but this time I wasn't plagued with suicidal thoughts, and the hallucinations were different and mostly visual. Dopamine overflows into serotonin, acetylcholine, and finally, adrenal receptors to try to safely displace the excess dopamine. Various other mechanisms like hormones for human growth and child bearing are likely affected too. If you continue to use meth after having a pissed off adrenal reaction and accompanying hallucinations, I'm sure the hallucinations become gigantic and you die in slow motion.

I remember my teeth starting to feel dirty even though I brushed, flossed, and mouth washed them on my normal schedule of once per night.  It's true you only need to clean your teeth once per night if your teeth are in good condition and you have a good diet.  Meth's effects on the decay of teeth is by pharmacological action and not the inaction of its users.

Methamphetamine appeared to have NET properties since it burned me over my whole body like 4-HO-MET withdrawal and like burning withdrawals people describe from cocaine and crack. It lacks the necessary dopamine inhibiting function which amphetamine possesses, and I think this leads to the poisonous feeling even in small amounts. Perhaps eventually the excess dopamine flows into the dopamine inhibiting mechanism, providing a false sense of security like when the unnatural, dopaminergic acetylcholine action brings a false sense of calmness to the experience. Before I started visually hallucinating, the frequencies of sound I could hear were altered to make everything sound like it was coming from a tin drum. It doesn't appear suitable for use by anyone except knowledgeable folks in a war zone. I have more questions about the experience than answers.