Members of the NBOMe series have been linked to numerous overdoses and fatalities.[1][2][3]

It is strongly discouraged to insufflate (snort) or take higher doses of these compounds. Please see this section for more details. 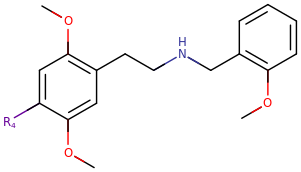 The general structure for a 25x-NBOMe compound

25x-NBOMe is the general form of the NBOMe series of psychedelic phenethylamines. The series had nearly no history of human use before 2010 when some of the first compounds became available for purchase from online research chemical vendors.

While members of this series are often misrepresented as LSD, a fundamental difference between them is that 25x-NBOMe is only active when taken through a sublingual or insufflated route. This means that to get the full effects, 25x-NBOMe blotter paper must be lightly chewed on for 20+ minutes and never immediately swallowed.

25x-NBOMe blotters cause numbness of the tongue and have a distinct taste that is often described as "strongly bitter", "metallic", or "chemical like". This is unlike LSD blotters, which will not cause numbness of the tongue and may be tasteless or have a slight flavor depending on the amount of ink on the blotter and the composition of the blotter paper.

Although these differences can be helpful in identifying an unwanted compound on a blotter, it is recommended that more reliable methods of identification be used, such as the use of testing reagents like the Ehrlich reagent.

Insufflation of these substances are highly discouraged due to numerous reports of people suffering dangerous and often fatal overdoses that have surfaced over the years.[citation needed]

In a comparison of 25x-NBOMe and 2C-x chemicals, each 25x-NBOMe molecule is a serotonergic N-benzyl derivative of the corresponding 2C-x molecule. This change in structure results in an increase in potency. It differs from the related 2C-x structurally through a substitution on the amine (NH2) with a 2-methoxybenzyl (BOMe) group. The addition of this BOMe group also causes most of the compounds to have relatively the same duration, regardless of how long the 2C-x counterpart lasts.

Members of the 25x-NBOMe series are not habit-forming and the desire to use them can actually decrease with use. They are thought to be most often self-regulating.

There is also the uncertainty of dosage on blotter paper since it is rather difficult to lay such an exact dosage. Insufflating, vaporizing or drinking tinctures of this substance is highly discouraged because of this and has been tied to many documented deaths[1][2][3]. One study found that 25I‐NBOMe and 25C‐NBOMe blotter papers contained 'hotspots' with higher quantities of the drug, implying an inherent risk of overdosing.[4]

The overdose effects of NBOMes are typically a dangerously high heart rate, blood pressure, hyperthermia and significant vasoconstriction[5][6] also accompanied by confusion, delusions, panic attacks, aggressive behavior, numbness or pain, amnesia and often seizures. The risks in an overdose include anything from organ failure to cardiac arrest and death[citation needed]. There are also multiple reports of people lethally injuring themselves or falling to death[7][8]. Benzodiazepines or antipsychotics can help with the psychological effects during an overdose although medical attention should always be called in even a possible overdose of 25I-NBOMe.