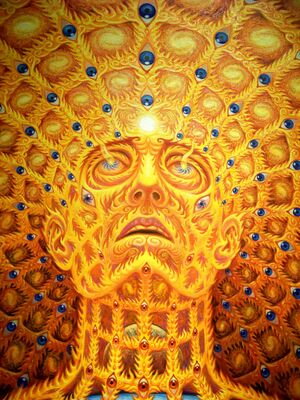 Oversoul by Alex Grey - An example of psychedelic artwork created by the renowned artist known as Alex Grey. This image is a representation of an experience report found within the 1901 book Cosmic Consciousness

Psychedelics are a class of hallucinogens that act primarily by binding to and activating the receptors for serotonin, a key signaling molecule in the brain. Serotonin plays a number of critical roles all throughout the human body but in the brain, it is especially linked to the proper functioning and regulation of sensory perception, behavior, mood, cognition and memory.[1]

The term was coined by the British psychiatrist Humphrey Osmond in 1956 and derives from the Greek words ψυχή (psyche, "soul, mind") and δηλείν (delein, "to manifest") which taken together mean "soul-manifesting," with the implication being that psychedelics can allow one to access the soul and develop unused potentials of the human mind.[2][3]

In modern times, psychedelic substances are used in a range of contexts spanning from the shamanic, religious and "spiritual", or the transpersonal. They are often referred to as entheogens ("generating the divine within")[4] by those who use them for these purposes, although they are also used solely for recreational purposes as well. 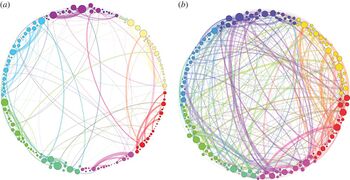 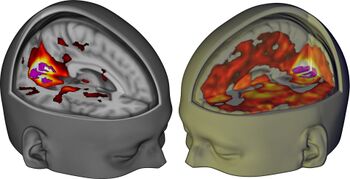 This image shows how, with eyes-closed, much more of the brain contributes to the visual experience under LSD (right image) than under placebo (left image). The magnitude of this effect correlates with participants’ reports of complex, dreamlike visions.[6] 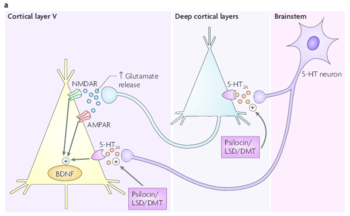 Figure 1 - Activation of the prefrontal network and glutamate release by psychedelics. The figure shows a model in which hallucinogens, such as psilocin, lysergic acid diethylamide (LSD) and dimethyltryptamine (DMT), increase extracellular glutamate levels in the prefrontal cortex through stimulation of postsynaptic serotonin (5-hydroxytryptamine) 2A (5-HT 2A ) receptors that are located on large glutamatergic pyramidal cells in deep cortical layers (V and VI) projecting to layer V pyramidal neurons. This glutamate release leads to an activation of AMPA (α-amino-3-hydroxy-5-methyl-4- isoxazole propionic acid) and NMDA (N-methyl-d-aspartate) receptors on cortical pyramidal neurons. in addition, hallucinogens directly activate 5-HT2A receptors located on cortical pyramidal neurons. This activation is thought to ultimately lead to increased expression of brain-derived neurotrophic factor (BDNF).[7]
Further information: Serotonergic psychedelic 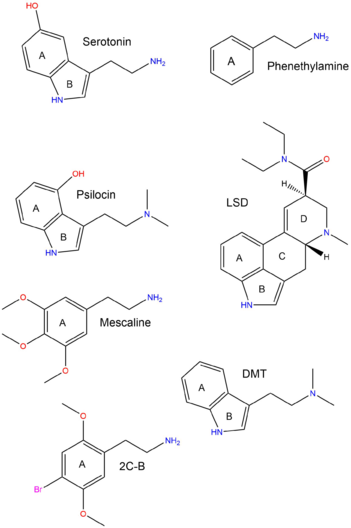 The "classical psychedelics" are all classed as serotonergic in nature.[8]This means that they structurally mimic the endogenous neurotransmitter known as serotonin, the neurotransmitter that regulates higher-level brain functions such as mood, sensory perception, cognition, and memory.[1] The diagram to the right shows the structural similarities and differences between the various classes of psychedelics and the serotonin neurotransmitter. The three classes (phenethylamines, lysergamides and tryptamines) all contain the same chemical rings (which have been labeled).

The information below describes and explains various concepts regarding the responsible use of psychedelic substances. These should be read over and carefully considered before one decides whether or not the potential benefits of experimenting with psychedelics outweighs the potential risks.