From PsychonautWiki
(Redirected from Tryptamine)
Jump to navigation Jump to search
For the eponymous compound, see Tryptamine (compound). 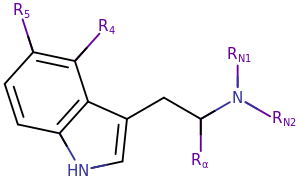 The chemical class encompasses a variety of biologically important compounds such as hormones like melatonin and the neurotransmitter serotonin (5-hydroxytryptamine). Many psychoactive tryptamines have been found to occur in nature, although a large number of synthetic variants have been discovered in recent years. Notably, the dimethyltryptamine (DMT) and 5-MeO-DMT have been found to occur in the human body, although their function is unclear.[citation needed] Most of the known substituted tryptamines act as psychedelics (e.g. psilocybin, DMT, ibogaine), although there are some that have entactogenic properties (e.g. aMT, 5-MeO-MiPT). Lysergamides can technically be classified as complex tryptamines[2], like Ibogaine.

In terms of subjective effects, psychedelic tryptamines are generally regarded as producing a significantly stronger and "deeper" psychedelic effect than the other major class of psychedelics, the substituted phenethylamines (e.g. mescaline or the 2C-x family). Users tend to report greater amounts of ego dissolution, time distortion, conceptual thinking, and transpersonal effects such as unity and interconnectedness with substituted tryptamines. The reason for this is unknown. The subcategory of hallucinogens known as entheogens predominantly consist of tryptamines such as DMT (including ayahuasca), 5-MeO-DMT, and psilocybin.

A systematic investigation of 55 psychoactive tryptamine and lysergamide compounds was published by Ann and Alexander Shulgin under the title TiHKAL ("Tryptamines I Have Known and Loved") in 1997.

The psychedelic effects of tryptamines are believed to come from their efficacy at the 5-HT2A receptor as a partial agonist. However, the role of these interactions and how they result in the psychedelic experience is the subject of on-going research.

This table does not include the following groups of substituted tryptamines: