2,5-Dimethoxy-4-ethylthiophenethylamine (also known as 2C-T-2, and Rosy) is a psychedelic substance of the phenethylamine chemical class that produces psychedelic effects when administered. It is a member of the 2C-x family of psychedelic phenethylamines, all of which were derived from the systematic modification of the mescaline molecule.

2C-T-2 was first synthesized and tested for activity in humans by Alexander Shulgin in 1981[1] and described in his 1991 book PiHKAL ("Phenethylamines I Have Known and Loved").[2] It is a member of the so-called "magical half-dozen" which refers to Shulgin's self-rated most important phenethylamine-derived compounds, all of which except mescaline he developed and synthesized himself. They are found within the first book of PiHKAL, and are as follows: mescaline, DOM, 2C-B, 2C-E, 2C-T-2 and 2C-T-7.[3]

Very little data exists about the pharmacological properties, metabolism, and toxicity of 2C-T-2, and it has a relatively short history of human usage. Many reports also indicate that its physical effects may be too severe for those who are not already experienced with psychedelics or suffer from pre-existing physical conditions. It is highly advised to approach this hallucinogenic substance with the proper amount of precaution and harm reduction practices if using it.

Following the initial positive results found by Shulgin's research group, a more formal study was carried out by psychedelic psychotherapy pioneer Myron J. Stolaroff who was interested in evaluating the potential use of 2C-T-2 in psychotherapy.[4] Based on the experiences of forty participants in the study who took 2C-T-2, Stolaroff compared the effects favorably to MDMA, describing it as more emotionally opening and permitting a wider exploration of feelings and thoughts. 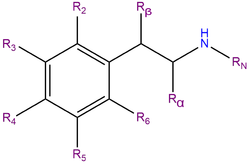 2C-T-2, or 2,5-dimethoxy-4-ethylthiophenethylamine, is a substituted phenethylamine featuring a phenyl ring bound to an amino (NH2) group through an ethyl chain. 2C-T-2 belongs to the 2C family of phenethylamines which contain methoxy functional groups CH3O- attached to carbons R2 and R5 of the benzene ring. 2C-T-2 is also substituted at R4 with an ethyl thioether group.

2C-T-2 is a close structural analogue of 2C-T-7; the two differ by the length of the alkane chain in their thioether functional group.[2]

Athough no established scientific experiments have been performed to establish MAO-A inhibition of 2C-T-2, phenethylamine derivatives substituted with an alkylthio group at the 4 position (4-MTA, and the 2,5-desmethoxy derivative of 2C-T-7) are known to act as selective monoamine oxidase A inhibitors.[citation needed] Furthermore, many compounds of the amphetamine-analogs of the 2C-T-x have been found to have highly selective MAO-A inhibition[5]. Therefore, this substance may likewise have MAOI effects.[6]

The toxicity and long-term health effects of recreational 2C-T-2 use do not seem to have been studied in any scientific context and the exact toxic dosage is unknown.

Anecdotal reports suggest that there are no negative health effects attributed to trying this drug, but nothing can be completely guaranteed.

2C-T-2 is not habit-forming, and the desire to use it can actually decrease with use. It is most often self-regulating.

Tolerance to the effects of 2C-T-2 is built almost immediately after ingestion. After that, it takes about 3 days for the tolerance to be reduced to half and 7 days to be back at baseline (in the absence of further consumption). 2C-T-2 presents cross-tolerance with all psychedelics, meaning that after the consumption of 2C-T-2 all psychedelics will have a reduced effect.

If 2C-T-2 does have MAOI effects as has been speculated,[citation needed] this could indicate that 2C-T-2 is more likely to induce serotonin syndrome or general neurotransmitter overload (especially at high dosages) than other serotonergic psychedelics.[5] This may make it dangerous to combine it with other MAOIs, stimulants and certain substances which promotes the release of neurotransmitters such as serotonin or dopamine. These substances include but are not limited to:

In November 2003, the European Council decided that 2C-T-2 shall be subjected by the Member States to control measures and criminal penalties within three months.[7]