4-Acetoxy-N-ethyl-N-methyltryptamine (also known as 4-AcO-MET, Metacetin, and Azomet) is a lesser-known novel psychedelic substance of tryptamine class. Members of this group produce psilocybin-like psychedelic effects when administered. It is structurally related to psychedelic tryptamines like 4-AcO-DMT, 4-AcO-DET, and 4-AcO-MiPT.

The substance is closely related in structure to 4-HO-MET, for which it is theorized to act as a prodrug. It is occasionally found in pressed pill which are sold on the streets in northern Switzerland under the name "Acomet" or "Azomet".[citation needed]

Very little data exists about the pharmacological properties, metabolism, and toxicity of 4-AcO-MET, and it has little history of human usage. It is sold as a research chemical online. It is highly advised to use harm reduction practices if using this substance. 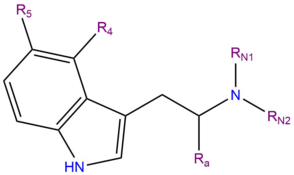 4-AcO-MET or 4-Acetoxy-N-methyl-N-ethyltryptamine is a synthetic indole alkaloid molecule of the tryptamine class. Tryptamines share a core structure comprised of a bicyclic indole heterocycle attached at R3 to an amino group via an ethyl side chain. 4-AcO-MET is substituted at R4 of its indole heterocycle with an acetoxy (AcO) functional group CH3COO−. It also contains a methyl group and an ethyl chain bound to the terminal amine RN of its tryptamine backbone (MET). 4-AcO-MET is an acetate ester analog of 4-HO-MET and the N-substituted ethyl homolog of 4-AcO-DMT.

It has been suggested that the substance is quickly hydrolyzed into the free phenolic 4-HO-MET by serum esterases, but human studies concerning the metabolic fate of this drug are lacking.[citation needed]

4-AcO-MET's psychedelic effects are believed to come from its efficacy at the 5-HT2A receptor as a partial agonist. However, the role of these interactions and how they result in the psychedelic experience continues to remain elusive.

It is also hypothesized that this compound is quickly hydrolyzed into the free phenolic 4-HO-MET, although human studies concerning the metabolic fate of this drug are lacking. This would explain a somewhat similar experience in their subjective effects. This is similar to how 4-AcO-DMT is thought to be deacetylated to 4-HO-DMT during first pass metabolism and subsequent passes through the liver.

The toxicity and long-term health effects of recreational 4-AcO-MET use do not seem to have been studied in any scientific context and the exact toxic dose is unknown. This is because 4-AcO-MET is a research chemical with very little history of human usage.

4-AcO-MET is not habit-forming and the desire to use it can actually decrease with use. It is most often self-regulating.