From PsychonautWiki
(Redirected from Entheogens)
Jump to navigation Jump to search
See also: List of entheogens 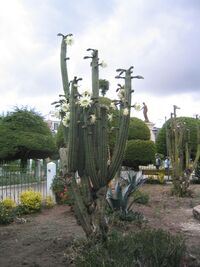 Flowering San Pedro, an entheogenic cactus that has been used for over 3,000 years[1]

Entheogens (from the Ancient Greek ἔνθεος entheos ["god", "divine"] and γενέσθαι genesthai ["generate" - "generating the divine within"]) are a family of psychoactive substances, typically of plant origin, that are used in religious, ritual, or spiritual contexts. Jonathan Ott is credited with coining the term in 1979.[2]

Entheogens have been used in a ritualized context for thousands of years and their religious significance is well established with anthropological and academic literature. Examples of traditional entheogens include psychedelics like peyote, psilocybin mushrooms, ayahuasca, and iboga; atypical hallucinogens like salvia and Amanita muscaria; quasi-psychedelics like cannabis; and deliriants like datura.

With the advent of organic chemistry, there now exist many synthetic drugs with similar psychoactive properties, many of which are derived from these plants. Many pure active compounds with psychoactive properties have been isolated from these respective organisms and synthesized chemically. These include the naturally occurring mescaline, psilocybin, DMT, salvinorin A, ibogaine, ergine, and muscimol, the semi-synthetic LSD, and synthetic substances (e.g., DPT used by the Temple of the True Inner Light and 2C-B used by the Sangoma).[3]

More broadly, the term entheogen is used to refer to any psychoactive substance used for its religious or spiritual effects, whether or not in a formal religious or traditional structure. This terminology is often chosen to contrast with the recreational use of the same substances. Studies such as the Marsh Chapel Experiment have documented reports of spiritual experiences from participants who were administered psychoactive substances in controlled trials.[4] Ongoing research is limited due to widespread drug prohibition; however, some countries have legislation that allows for traditional entheogen use.

The term "entheogen" comes from the Greek en, meaning “in” or “within”; theo, meaning “god” or “divine”; and gen, meaning “creates” or “generates.” It translates as “generating or creating the divine within".[citation needed]

Consumption of the imaginary mushroom anochi as the entheogen underlying the creation of Christianity is the premise of Philip K. Dick's last novel, "The Transmigration of Timothy Archer".

Aldous Huxley's final novel, Island (1962), depicted a fictional entheogenic mushroom — termed "moksha medicine" — used by the people of Pala in rites of passage, such as the transition to adulthood and at the end of life.

In his book "The Sacred Mushroom and the Cross: A Study of the Nature and Origins of Christianity within the Fertility Cults of the Ancient Near East", John M. Allegro argues etymologically that Christianity developed out of the use of a psychedelic mushroom, the true body of Christ, which was later forgotten by its adherents.