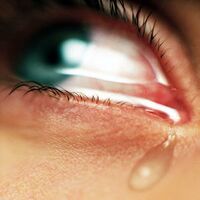 An image example of watery eyes

Watery eyes can be described as a physical effect which results in a state of continuous involuntary streaming, tearing, crying, and watering of the tear ducts within one's eyes. The experience of this effect often leads to the feeling that a person is crying for no reason despite a complete absence of the relevant emotions one would usually expect during such a state.

Watery eyes is often accompanied by other coinciding effects such as excessive yawning and a runny nose. It is most commonly induced under the influence of moderate dosages of psychedelic tryptamine compounds, such as psilocybin, 4-AcO-DMT, and 4-HO-MET.