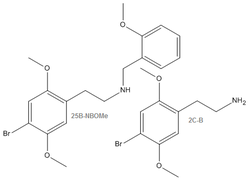 25B-NBOMe has efficacy at the 5-HT2A receptor where it acts as a potent partial agonist.[2][5][6][3] However, the role of these interactions and how they result in the psychedelic experience continues to remain elusive.

25B-NBOMe is a relatively new substance, and little is known about its pharmacological risks or its interaction with other substances. The lethal dosage has not yet been determined. One case has been reported on where 25B-NBOMe was identified as the cause of death for a 17-year-old boy.[7]

It is advised that due to 25B-NBOMe's extreme potency it should not be insufflated as this method of administration is potentially fatal at heavy dosages.[1]

25B-NBOMe has been used in clinical trials with an evaluation dose for safety consideration to humans of only 1 microgram; Such a dose is 300× lower than the dose expected to be hallucinogenic to humans and it is expected that recreational use would greatly exceed doses determined to be safe to humans.[8]

There is also the uncertainty of dosage on blotter paper since it is rather difficult to lay such an exact dosage. Insufflating, vaporizing or drinking tinctures of this substance is highly discouraged because of this and has been tied to many documented deaths[9][10][1]. One study found that 25I‐NBOMe and 25C‐NBOMe blotter papers contained 'hotspots' with higher quantities of the drug, implying an inherent risk of overdosing.[11]

The overdose effects of NBOMes are typically a dangerously high heart rate, blood pressure, hyperthermia and significant vasoconstriction[12][13] also accompanied by confusion, delusions, panic attacks, aggressive behavior, numbness or pain, amnesia and often seizures. The risks in an overdose include anything from organ failure to cardiac arrest and death[citation needed]. There are also multiple reports of people lethally injuring themselves or falling to death[14][15]. Benzodiazepines or antipsychotics can help with the psychological effects during an overdose although medical attention should always be called in even a possible overdose of 25I-NBOMe.