From PsychonautWiki
(Redirected from Phenethylamines)
Jump to navigation Jump to search
For the eponymous compound, see Phenethylamine (compound). 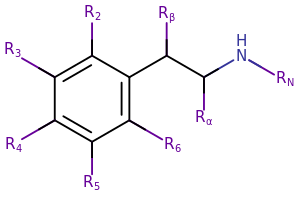 Many of these psychoactive compounds exert their pharmacological effects primarily by modulating monoamine neurotransmitter systems; however, there is no mechanism of action or biological target that is common to all members of this subclass.

Phenethylamines have been identified as the fourth largest category of substances with a total of 102, falling behind cathinones with 156 substances and cannabinoids with 209 substances, according to a report by the EU Early Warning System.[1]

This table does not include the following groups of substituted phenethylamines: