Mirtazapine was developed in the Netherlands and introduced in the United States in 1996.[2] Its patent expired in 2004 and generic versions have been widely available since.[3] It is used primarily in the treatment of major depressive disorder and other mood disorders.[4][5] It has also been prescribed off-label for the treatment of generalized anxiety disorder,[6] social anxiety disorder,[7][8] obsessive-compulsive disorder,[7][9] panic disorder,[7][10] post-traumatic stress disorder,[7] low appetite,[11][12][13] insomnia,[14][15] nausea/vomiting,[16][17][18] itching,[19][20] and headaches and migraines.[17][21][22]

Higher doses of mirtazapine (that exceed the recommended prescription dose) are reported to produce an unusual mixture of psychedelic and sedative effects. Subjective effects include sedation and mild-moderate versions of open and closed-eye visuals, conceptual thinking, and euphoria. Mirtazapines has potential paradoxical effects concerning it's sedative effects. Anecdotal reports and studies suggest it's Sedation decreases as the dose increases. (7.5mg is more sedating than 15mg.) One theory suggests it has minor Stimulant effects that overpowers it's sedative effects.[citation needed]

Mirtazapine is a synthetic tetrahedral molecule of the piperazino-azepine and phenethylamine group of compounds. It is comprised of a fusion of pyridine, benzene, azepine, and piperazine rings. It is a tetracyclic antidepressant, named so because of their four-ring structure. Mirtazapine is the 6-aza analog of mianserin, which is pharmacologically similar in function.

Mirtazapine enhances central adrenergic and serotonergic transmission, possibly by acting as an antagonist at central presynaptic alpha 2 adrenergic inhibitory autoreceptors and heteroreceptors. This agent is a potent antagonist of 5-hydroxytryptamine type 2 (5-HT2), 5-HT3, and histamine 1 (H1) receptors, and a moderate antagonist of peripheral alpha 1 adrenergic and muscarinic receptors.[23]

Mirtazapine acts as an antagonist/inverse agonist upon the following receptors:[24][25]

While mirtazapine has some affinity for the 5-HT2A receptor, it acts as an antagonist[6] thus it is unlikely that this mechanism is responsible for its psychedelic and deliriant effects.

Mirtazapine has also been found to modulate the κ3 opioid receptor, supporting the claim that mirtazapine causes pain relief[32] and adds to the sedative and hallucinogenic effects of mirtazapine[33][34]. This even may explain mirtazapine's withdrawal/discontinuation effects as well as its promotion of diuresis and a possible increase in food intake (usually resulting in weight gain).

The oral bioavailability of mirtazapine is about 50%. It is found mostly bound to plasma proteins, about 85%. It is metabolized primarily in the liver by demethylation and hydroxylation via cytochrome P450 enzymes, CYP1A2, CYP2D6, CYP3A4.[6] One of its major metabolites is desmethylmirtazapine. The overall elimination half-life is 20–40 hours. It is conjugated in the kidney for excretion in the urine, where 75% of the drug is excreted,[35] and about 15% is eliminated in feces.[36] 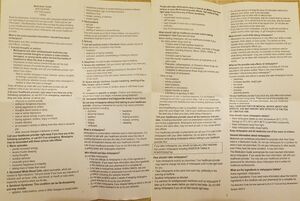 Mirtazapine is considered to be relatively safe in the event of an overdose,[38] although it is considered slightly more toxic in overdose than most of the SSRIs (except citalopram).[39] Unlike the TCAs, mirtazapine showed no significant cardiovascular adverse effects at 7 to 22 times the maximum recommended dose.[40] Case reports of overdose with as much as 30 to 50 times the standard dose described the drug as relatively nontoxic, compared to TCAs.[41][42]

Twelve reported fatalities have been attributed to mirtazapine overdose.[43][44] The fatal toxicity index (deaths per million prescriptions) for mirtazapine is 3.1 (95% CI: 0.1 to 17.2). This is similar to that observed with SSRIs.[45]