There is some discrepancy in the various characteristics of color distortions caused by psychedelic substances, as we only describe one variant (color shifting) which is named ambiguously.

Though "Shifting" is potentially reasonable, it can give the impression of an element moving position rather than changing in quality. In the following example, "shifting" is used to refer to the misalignment of RGB channels. An experience I have had with a high dose of 2C-C specifically.

We also describe diffraction in an article which appears to represent this quality:

There is also a phenomenon called chromatic aberration, caused by distortion of a camera lens, which appears like this: 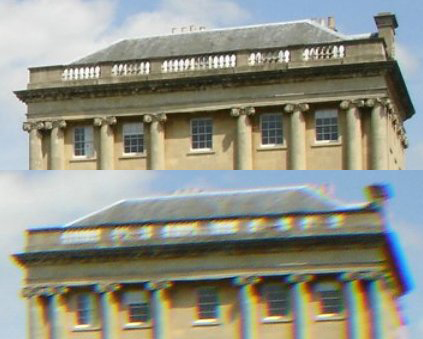 Also, as the size of an aperture like the iris increases, diffraction distortions become apparent:

In our article for color shifting, the images examples we refer to exhibit colors which change in a cyclic nature:

Colour shifting can be described as a visual effect in which the colors of various objects (particularly bright or out of place objects) shift and change their appearance through a repeated cycling of varying colors in a strange and fluid motion across their surface. For example, moss on a rock could physically shift from green to red to blue to any other color and then back to green again in the visual style of a smooth and seamless animated loop.

I propose that we rename the cycling of colors to one of the following, so that we can also describe other color distortions.

With an alternative name we can then describe the misaligned channels effect as something below.