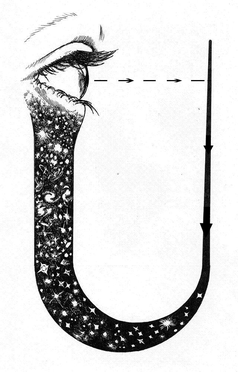 This symbol depicts the universe as a "self-excited" circuit. It was originally created by the late theoretical physicist John Archibald Wheeler in his 1983 paper Law Without Law. The eye represents the self and the line directly opposite represents that which it is perceiving within the "external" environment. The two sections are connected into each other via arrows to demonstrate that it is a singular and unified system.

Unity and interconnectedness can be described as the experience of one's sense of self becoming temporarily changed to feel as if it is constituted by a wider array of concepts than that which it previously did. For example, while a person may usually feel that they are exclusively their “ego” or a combination of their “ego” and physical body, during this state their sense of identity can change to also include the external environment or an object they are interacting with. This results in intense and inextricable feelings of unity or interconnectedness between oneself and varying arrays of previously "external" systems.

It is worth noting that many people who undergo this experience consistently interpret it as the removal of a deeply embedded illusion, the destruction of which is often described as some sort of profound “awakening” or “enlightenment.” However, it is important to understand that these conclusions and feelings should not necessarily be accepted at face value as inherently true.

Unity and interconnectedness most commonly occurs under the influence of psychedelic and dissociative compounds such as LSD, DMT, ayahuasca, mescaline, and ketamine. However it can also occur during well-practiced meditation, deep states of contemplation, and intense focus.

There are a total of 5 distinct levels of identity which a person can experience during this state. These various altered states of unity have been arranged into a leveling system that orders its different states from least to the most number of concepts that one's identity is currently attributed to. These levels are described below:

At the lowest level, this effect can be described as a perceived sense of unity between two or more systems within the external environment which in everyday life are usually perceived as separate from each other. This is the least complex level of unity, as it is the only level of interconnectedness in which the subjective experience of unity does not involve a state of interconnectedness between the self and the external.

There are an endless number of ways in which this level can manifest, but common examples of the experience often include:

2. Unity between the self and specific "external" systems

At this level, unity can be described as feeling as if one's identity is attributed to (in addition to the body and/or brain) specific external systems or concepts within the immediate environment, particularly those that would usually be considered as intrinsically separate from one's own being.

The experience itself is often described as a loss of perceived boundaries between a person’s identity and the specific physical systems or concepts within the perceivable external environment which are currently the subject of a person's attention. This creates a sensation of becoming inextricably "connected to", "one with", "the same as", or "unified" with whatever the perceived external system happens to be.

There are an endless number of ways in which this level can manifest itself, but common examples of the experience often include:

3. Unity between the self and all perceivable "external" systems

At this level, unity can be described as feeling as if one's identity is attributed to the entirety of their immediately perceivable external environment due to a loss of perceived boundaries between the previously separate systems.

The effect creates a sensation in the person that they have become "one with their surroundings.” This is felt to be the result of a person’s sense of self becoming attributed to not just primarily the internal narrative of the ego, but in equal measure to the body itself and everything around it which it is physically perceiving through the senses. It creates the compelling perspective that one is the external environment experiencing itself through a specific point within it, namely the physical sensory perceptions of the body that one's consciousness is currently residing in.

It is at this point that a key component of the high-level unity experience becomes an extremely noticeable factor. Once a person's sense of self has become attributed to the entirety of their surroundings, this new perspective completely changes how it feels to physically interact with what was previously felt to be an external environment. For example, when one is not in this state and is interacting with a physical object, it typically feels as though one is a central agent acting on the separate world around them. However, while undergoing a state of unity with the currently perceivable environment, interacting with an external object consistently feels as if the whole unified system is autonomously acting on itself with no central, separate agent operating the process of interaction. Instead, the process suddenly feels as if it has become completely decentralized and holistic, as the environment begins to autonomously and harmoniously respond to itself in a predetermined manner to perform the interaction carried out by the individual.

4. Unity between the self and all known "external" systems

At the highest level, this effect can be described as feeling as if one's identity is simultaneously attributed to the entirety of the immediately perceivable external environment and all known concepts that exist outside of it. These known concepts typically include all of humanity, nature, and the universe as it presently stands in its complete entirety. This feeling is commonly interpreted by people as "becoming one with the universe".

When experienced, the effect creates the sudden perspective that one is not a separate agent approaching an external reality, but is instead the entire universe as a whole experiencing itself, exploring itself, and performing actions upon itself through the specific point in space and time which this particular body and conscious perception happens to currently reside within. People who undergo this experience consistently interpret it as the removal of a deeply embedded illusion, with the revelation often described as some sort of profound “awakening” or “enlightenment.”

Although they are not necessarily literal truths about reality, at this point, many commonly reported conclusions of a religious and metaphysical nature often begin to manifest themselves as profound realizations. These are described and listed below:

Similar accounts of the experience of unity with the universe and the apparent illusory nature of the self can be found across a surprisingly large variety of independent religious, philosophical, and psychological sources. A number of these have been collected and listed as a set of documented examples below:

Substances which may cause this effect include: