I've had many experiences with various substances (e.g. MDMA, 2C-B, AL-LAD, 1P-LSD, LSD, Psilocybin, Ketamine, Dextromethorphan) but never have I ever taken a psychedelic without a trip-sitter. At the time of this report I had tripped on 2C-B (around five times) and twice on 1P-LSD (only with 50ug). My roommates left for a vacation so I had the apartment for the weekend and I had the great idea to trip.
Setting: It was my first time tripping alone so I was pretty excited and slightly nervous.
Set: in my apartment 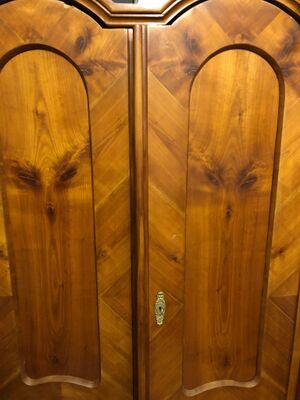 Picture of the Alien Cupboard

00:40
I started to feel the effects kick in. My pupils dilated and my hands started getting clammy.

01:15
This was when the effects started to get really apparent. The bodyload was getting more intense, the colors started to brighten up and I had tracers whenever I quickly looked at something. I was very clear-headed and stimulated at that point so I listened to some Ambient music. The music sounded fantastic and synergized very well with my thoughts and visuals.

01:30
I then walked around in the apartment and through the other rooms which was really interesting. One of my roommates has a huge, wooden cupboard that had a few brown spots on it which looked like aliens to me!! I was a little bit terrified because I had never recognized these alien faces before even though I had seen the cupboard multiple times. Luckily, I was rational and lucid enough to understand that the drug was making me see these faces and its actually no big deal. After that, I went to my bed and looked at all the beautiful visuals twist and twirl.

02:00
I think this was the peak of the experience and I remember being very euphoric and pleased with the experience, mainly because my first time tripping alone was really cool thus far and all my worries that something could go wrong disappeared. 2C-B is a very lovely psychedelic and was awesome for my first time alone but somehow I really wanted to go deeper. As I was laying in my bed I started to fantasize about how I wanted to connect to higher extraterrestrial beings and how to explore the unknown. I was thinking about smoking DMT (because I had some lying around) but I knew that this was probably a stupid idea because I've never smoked it before and I didnt even know how to do it. Then I thought about the 1P-LSD I had acquired a couple of months earlier and decided that I was going to trip again tomorrow. I was firmly convinced that I needed to trip and that there was something for me to learn.

04:00
The 2C-B comedown was very enjoyable because the effects faded very gently and the after effects were pretty soothing. I was really excited for the next day and had no problem falling asleep that night.

Day after and 2nd Trip (Sunday)

I woke up with a minor headache and a dry mouth because I didn't drink much the day before but other than that I felt fine. I was a little skeptical towards the idea of dropping the 1P-LSD because I didnt really think through what could happen. I was getting worried and started to doubt that this was a good idea.

00:00
After a couple of minutes of uncertainty I said fuck it and put the tab of 1P-LSD under my tongue.

00:30
I felt that something was different but didn't exactly know what.

01:00
The visuals started to get really intense and my vision was blurry. I saw amazing patterns on my wall and everything was moving and warping around. I immediately noticed that I was thinking a lot quicker and a lot more than with the 2C-B and that I was having intricate and complex thought processes. I felt very serene and at peace and I decided to put on some 60's music (Creedence Clearwater Revival, Buffalo Springfield etc.) to let the 1P take me wherever it wanted to. I was trying to accustom and to surrender to the psychedelic experience.

03:00
After 3 hours the 1P-LSD took full effect and I was really enjoying it. Sometimes I started to forget what our normal reality and the meaning of time was but I could comfort myself by telling me that everything's gonna be ok and that I will be normal again in a few hours. I was in a very child-like state and i felt this strong feeling of trust and tranquility. This feeling of self-trust persisted for the whole trip and distracted me from dark thoughts and sinister vibes. As I was laying in my bed with closed-eyes I had vivid hallucinations of colorful patterns that were going with the flow of the music similar to the 2C-B I had the day before. Meditation strongly intensified my trip and I had a short period of time (around 3 minutes) where my ego dissolved completely and I felt like I was one with everything. There was a beam of light coming out of my head and connecting with a spinning, golden plate (looking like a UFO kind of) that abducted my brain, all my memories and knowledge. It wasn't scary or anything because it just felt right, it felt so cozy and comfortable that I had no problem letting go. I was completely ok with my memories dying and my brain being empty because this feeling of trusting myself was very strong. As I was letting go I felt the biggest euphoria in my entire life (not even a high dose of MDMA came close to this beutiful feeling) ! I was extremely proud of myself and the feeling of purifying my soul and my brain was extremely pleasurable. The euphoria from 1P-LSD felt very natural and real wheras the MDMA euphoria feels kind of synthetic and a little bit fake to me (probably because I'm used to the effects). The time was distorted heavily because the peak seemed like an eternity.

05:30
This was the moment when the peak subsided and when I knew that I had achieved what I wanted and that I got everything out of this trip. The trip was still pretty strong and I decided to get something to eat and drink despite having no appetite. Eating felt very weird and I had a hard time swallowing the food. Everytime I swallowed something I was able to feel it going through my body until it landed in my stomach. This was kind of unpleasant so I stopped and returned to bed where I looked at trippy google images. This feeling of "YOU TRUSTED YOURSELF AND WERE NOT DISAPPOINTED" was really satisfing and felt like it was long overdue.

06:30
I dont exactly know why but at the 06:30 mark I decided that I wanted to end this trip. Not because I was scared or anything but it seemed like I had everything I wanted, so that's why I took half of a 2.5 mg Temesta (Lorazepam) tablet.

06:45
Effects started to get a little bit suppressed and my thought processes slowed down.

07:00
The benzo worked but it wasn't strong enough to suppress the 1P-LSD headspace entirely. I thought about what had happened and how this weekend was one of the best I've ever had. I proceeded listening to some music, watched a movie and took a shower.

12:00
My trip ended here and I went to bed. I had no trouble sleeping, probably because of the Lorazepam.

I woke up feeling like a new person! The feeling of self-trust was still strongly present and it honestly felt like I was reborn as a better person. I had no sign of a hangover whatsoever but I felt more emotional and more vulnerable (probably 1P-LSD after effects).

It was a great weekend and I had two of the most meaningful trips ever. The 2C-B on saturday wasn't nearly as insightful as the 1P-LSD on sunday but if I hadn't tripped on the 2C-B I'd prbably never tripped on the 1P. These trips gave me confidence, willpower and learned me a lot so overall a very positive experience.