From PsychonautWiki
(Redirected from Property:Internal hallucinations)
Jump to navigation Jump to search 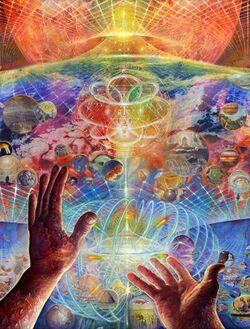 Parabolic Vehicle of Conception by Adam Scott Miller - This serves as an example of visionary art which attempts to accurately portray and replicate the experience of psychedelic level 5 geometry combined with level 3 internal hallucinations.

At lower levels, internal hallucinations begin with imagery on the back of a person's eyelids which do not take up the entirety of one's visual field and are distinct from their background. These can be described as spontaneous moving or still images of scenes, concepts, places, and anything one could imagine. The imagery is manifested in varying levels of realism, ranging from ill-defined and cartoon-like in nature to wholly realistic. They rarely hold their form for more than a few seconds before fading or shifting into another image. It is worth noting that this level of intensity occurs in a highly similar manner to that of hypnagogia, the state between sleep and wakefulness.

At higher levels, internal hallucinations become increasingly elaborate as they eventually become all-encompassing, fully-fledged 3D scenes which surround the person in a similar manner to that of dreams. This can create the feeling that one has "broken-through" into another reality. The things which occur within this perceived alternate reality can be anything but fall under common archetypes, such as contact with autonomous entities alongside a wide variety of imagined landscapes, and scenarios.

This effect is capable of manifesting itself across the 5 different levels of intensity described below:

The content within these external hallucinations can be further broken down into four distinct subcomponents. These are described and documented within their own dedicated articles, each of which are listed below:

Internal hallucinations are often accompanied by other coinciding effects such as geometry, external hallucinations and delusions. They are most commonly induced under the influence of heavy dosages of hallucinogenic compounds, such as psychedelics, dissociatives, and deliriants. However, they can also occur under the influence of stimulant psychosis, sleep deprivation, and during dreams.

Internal hallucinations typically last anywhere between 30 seconds and several minutes before the person slips back into reality or the presence of another hallucination. There are several different methods through which these hallucinations are transitioned between, these are described and documented below:

The specific differences between each potential style of internal hallucination can be broken down into the following variations: