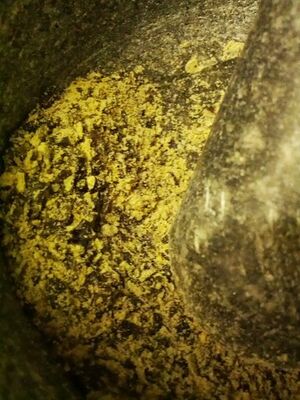 I have attempted to replicate the documented effects of Ipomea alkaloids several times. This is the first experiment in which I have tried to document and analyse the effects of any psychoactive.

A sunny day off from work in August, with no plans or other obligations. Out of interest in the effects of Ipomea alkaloids I attempted an extraction of Morning Glory seeds and sought to document their effect.

5 packets of Morning Glory seeds of the Heavenly Blue variety were obtained from a supermarket. The seeds were first rinsed in an attempt to remove any treatment which may have been present. They were placed in a tea strainer, mixed with a little detergent and rinsed in warm water for several minutes.

The seeds were spread on a tissue by an open window until dried then individually crushed with pliers to break the husks. A pestle and mortar was then used to grind the seeds into a rough powder. The seed mass was introduced to around 50ml of water, which had been earlier boiled and left to cool, along with a sprinkle of citric acid to raise the pH. Due to privacy reasons the temperature could not be controlled by using the fridge, and so the seeds were left at room temperature in a closet for around 8 hours to extract.

09:00 A clove of garlic was chopped, crushed, and added to the mixture. After 30 minutes or so it was roughly filtered using a tea strainer and a little juice concentrate was added to help mask the flavour. The seed material was not entirely separated which probably contributed to the body load which I was in no way expecting or prepared for. Please be aware that while replicating any experiment with Ipomea seeds, bodily discomfort will dominate your thought stream and alter the intentions of your experience. Garlic in this case did not eliminate nausea and I am reluctant to repeat the experiment because of this. It is of course important to point out that it is well documented that toxic principals in the seeds cause these effects and not the lysergamide alkaloids. If a pure product can be achieved then experience may not include such massive discomfort.

09:30 I held my nose and paused my breath as I chugged the half pint or so of liquid and quickly chased it with what was left of my coffee. I could taste the jet of garlic air which escaped my stomach as I swallowed. Mild nausea was present pretty much instantly but appeared to settle just as quick. I am very reluctant to burp at this time.

10:00 Stomach cramps begin, a warmness reminiscent of sweet opioids fill my aching arms. My peripheral field appears to flash if I do not move my eyes. I notice that the LED on my router is flashing at the same frequency. I describe this as exaggeration or enhancement of movement in peripheral vision.

10:30 Stomach discomfort persists and vasoconstriction is apparent. I go outside for a cigarette and notice that the muscles in my arms and legs, which I had pulled the day before by digging up weeds in the garden, are much more sore. The hairs on my arms erect in the breeze and seem to not reset. I notice some tactile enhancement as I glide a hand over the fluffy skin. I make a coffee with ground ginger to help alleviate symptoms.

10:45 Light sensitivity has increased and pupils are noticeably dilated. Bright images outside my window are burned into my retina with just a quick glance. Sedation is becoming evident.

11:15 Nausea has mostly subsided. I noticed an effect where a cloud in my peripheral vision seemed to pop into position on the inside of my window. It went away when I looked up at it.

11:30 Pattern recognition is exaggerated as outlines of shapes dramatically pop out of the white space between characters in paragraphs of text. Subtle visual disturbances are becoming more apparent; drifting of edges when focus is maintained, enhanced interest in the detail of textures. My senses feel magnified, including the ability to visualise concepts and the thought stream itself. Discomfort is still present but subsiding. Garlic burps are so gross, zomg. I venture to the garden for another cigarette and am hit by a wave of blissful warmth on my skin from the sun. My temperature sensing equipment is exaggerated.

12:00 I had a shower to increase sensory stimulation. Visual enhancement can be described as an increased awareness and interest in elements such as depth; the fibres of the carpet which could be seen individually standing rather than perceiving it as a flat material. The pattern of repeating curves in the ceiling covering drew my attention. Tactile enhancement increased the pleasure of warm water on skin. Feelings of comfort and well being are exaggerated and then I become aware of the signals my body is producing which show previous neglect or disinterest with my health and fitness. Anxiety, heart rate increase.

12:30 Uncomfortable stimulation is present. I am no longer content with simply consuming information on the computer. A need to be active dominates my thoughts and I increase my physical exertion in an attempt to match the increased heart rate I am experiencing. I decide to tidy my room as is long overdue; I find this difficult and frustrating as my body appears to be in panic mode. I stumble into objects while messily cleaning my desk, equipment and floor. I am unable to relax and ignore worries which are usually not thought about such as approaching debt repayments and personal relationships. Still aware of stomach discomfort. My vision appears degraded at this point, less detail is noticed and my ability to focus is dramatically impaired as I fumble about the room.

13:00 Stomach discomfort has been replaced by a general bodily discomfort. Muscles are shaking much more than usual and are very sore from gardening work done the day before. The pain is exaggerated. Temperature fluctuations are now dramatic. Visual changes are now described as a general enhancement of textures, patterns, etc but these effects no longer draw interest towards them and neurochemical reward is no longer gained from perceiving them. I organize documents and letters which have long been stacked indifferently on my desk to clear my desk and also my mind of the disorganization.

13:30 Effects are clearly tailing off as my body recovers and anxiety drops. Glad to be sobering tbh, there is way too much body discomfort and anxiety with this preparation.

14:30 Lingering vasoconstriction and subsequent temperature control impediments are still apparent. Stomach feels rough like after a night of heavy alcohol use.

15:00 Mostly back to baseline, the experiment is over as I begin to think about preparing something nutritious.

23:00 Following a joint of some high grade cannabis subtle lingering effects have increased somewhat, causing various effects to become more pronounced. These include enhanced patterns in surfaces manifesting as higher affinity towards recognition of outlines of familiar shapes, especially faces and creatures. I assume this is due to the mass of information held by the brain relating to detecting and analysing small muscle movements in faces and creatures as whole. Shadows and edges may be dramatically misinterpreted in peripheral vision as distorted in some way as if the peripheral field is rippling.

It has also come to my attention that sound has become exaggerated. I notice that if I listen in silence to my computer buzz away with the white noise emitting from my amplifier and from the vibrations of fans and drives, patterns of repeating multi track bars and note sequences manifest in my thought stream where usually this information would be ignored and interpreted as static. Music is enhanced in detail and my ears are more sensitive to sound, as if the the waveform emitted from the speakers is sampled at a more regular rate and at a higher input gain.

Sense of touch remains elevated, exaggerated connection to body via reduction of information filtered to neural processes including aches and other increased accuracy from touch like temperature and density. Results are skewed towards pain sensitivity in this case by the lack of opioids.

On analysis of my notes during this experiment, I conclude that this substance causes a broad enhancement of concepts and feelings which are presented as input to the thought stream. Visual elements such as depth perception, pattern recognition, edge definition, movement and light were most apparent but this is because vision is the most dominant sense in terms of inputs to the brain. Other senses included enhanced elements such as temperature and touch, exaggerated feedback from my body in the form of pains and pleasures. I didn't notice any change in the perception of smell, taste or hearing, though such inputs were entirely capable of producing feelings of well being, relaxation or reward via release of neurochemicals following the exaggerated activation of those circuits. Thoughts appeared animated and colorful, more brighter, enhanced in the minds eye.