From PsychonautWiki
(Redirected from Elemicin)
Jump to navigation Jump to search

Myristicin is a naturally-occurring deliriant substance of the phenylpropene class. It is present in small amounts in the essential oil of nutmeg and, to a lesser extent, in other spices such as parsley and dill.[1] It acts as an anticholinergic in high doses[citation needed], and has been shown to act on the endocannabinoid system.[2]

Nutmeg is reported to induce hallucinogenic effects, such as visual distortions and paranoid ideation. In the reports, nutmeg intoxication took several hours before maximum effect was reached. Effects and after-effects lasted up to several days. Raw nutmeg consists of 5-15% essential oil by mass. 4-8.5% of nutmeg essential oil, or 0.2-1.3% of raw nutmeg, is myristicin. One study found 20 grams of nutmeg to contain 210 mg myristicin.

In 1963, Alexander Shulgin speculated myristicin could be metabolized to MMDA, a psychoactive drug related to MDA, in the liver.[3] This, however, is unlikely due to the fact that no amphetamine metabolites were found in urine after the ingestion of myristicin. It is believed that myristicin is an anticholinergic, since, in overdose, it produces effects similar to anticholinergics[4][5], but the exact mechanism of action has not been established. Myristicin is also found to be a serotonin receptor antagonist, while simultaneously acting as a weak MAO inhibitor.[citation needed]

No compound has been found in nutmeg to directly bind to CB1 or CB2 receptors. Three compounds in nutmeg (Malabaricone C, Licarin A, 5-Methoxylicarin A) have been shown to act as endo-cannabinoid modulating agents by inhibiting the enzymes FAAH and MAGL.[6] 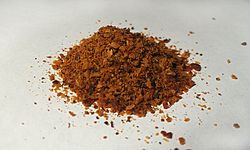 Myristicin is neurotoxic and can be fatal in extremely high doses.[7] Also myristicin causes severe dehydration. It increases side effects of myristicin.