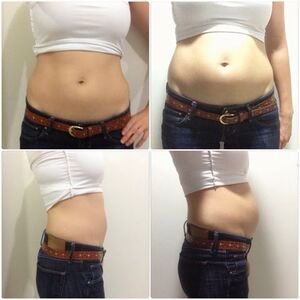 Stomach bloating can be described as an uncomfortable physical side effect which results in one's stomach becoming temporarily bloated and expanded in a manner which looks somewhat similar to pregnancy. This effect can be moderately uncomfortable but is not painful or dangerous. Its overall duration can last anywhere from a couple of hours to a couple of days and can be reduced by drinking plenty of water.

In the context of substance usage, stomach bloating can occur as a result of stomach irritation through the consumption of materials which it is not used to digesting. These materials can include things such as chemical powders or plant matter. Alternatively, stomach bloating may occur as a direct pharmacological result of how the particular substance affects the large amount of serotonin receptors present within the intestinal wall.

Stomach bloating is often accompanied by other coinciding effects such as nausea and vomiting. It is most commonly induced under the influence of heavy dosages of psychedelic compounds, such as LSD, psilocybin, and mescaline. However, it can also occur under the influence of stimulants, opioids, and depressants.