Propylhexedrine (also known as Benzedrex and Obesin) is a stimulant substance of the cycloalkylamine class. It is a structural analog of methamphetamine. Propylhexedrine is widely used medicinally as a nasal decongestant (for relief of congestion due to colds, allergies and allergic rhinitis) and sometimes used recreationally as an over-the-counter "legal high".

Benzedrex was first manufactured by Smith, Kline and French after the Benzedrine inhaler, which contained racemic amphetamine, became unavailable following the placement of amphetamines on the US Schedule II status (i.e. highest abuse potential, yet with accepted medicinal uses). Propylhexedrine has also been used in Europe as an appetite suppressant under the trade name Obesin. In the United States, propylhexedrine is most commonly found in over-the-counter Benzedrex nasal inhalers.

Subjective effects include stimulation, focus enhancement, motivation enhancement, increased libido, appetite suppression, and euphoria. Anecdotal reports describe propylhexedrine's effects as similar to amphetamine or low-dose methamphetamine. However, it is reported to produce more peripheral effects like vasoconstriction as well as less euphoria, overall resulting in a less "clean" high. In the United States, propylhexedrine is sometimes extracted from over-the-counter Benzedrex nasal inhalers using lemon juice. The health risks of this practice have not been studied.

Due to its amphetamine-like euphoric effects, propylhexedrine is considered to have moderate abuse potential. Chronic use may result in tolerance, physical and psychological dependence. It is highly advised to use harm reduction practices if using this substance. 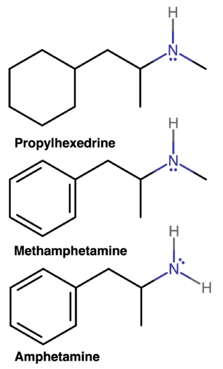 Freebase propylhexedrine is nonpolar, volatile, oily liquid at room temperature, but it readily forms a polar salt when protonated with hydrochloric acid, citric acid, and acetic acid to form a crystalline white substance.[citation needed] As a volatile liquid, it evaporates over time, losing potency drastically quicker than crystalline substances; However, the salt forms are crystalline, and do not evaporate.

Propylhexedrine affects the central nervous system (CNS) by acting as a releasing agent for the monoamine neurotransmitters dopamine, norepinephrine, and serotonin (SNDRA), binding to and reversing their transporters, pumping these neurotransmitters from the cytosol to the synaptic cleft, where these neurotransmitters can bind to their respective receptors. Additionally, propylhexedrine inhibits VMAT2, leading to a further increase in the aforementioned monoamines, being that VMAT2 transports all 3 from the synaptic cleft to the cytosol.[citation needed]

The pharmacological actions of propylhexedrine are similar to those of phenethylamines, such as amphetamines, albeit in a generally less centrally active and recreationally desirable fashion.[1]

Since propylhexedrine has a cyclohexane ring in the place of methamphetamine's phenyl ring, it lacks the level of Brain-Blood Barrier permeability that the phenyl ring provides amphetamines, and therefore has a greater proportion of effects on the peripheral nervous system relative to the central nervous system.[2]

The toxicity of recreational propylhexedrine use has not been studied as extensively as that of amphetamine or methamphetamine but it is reasonable to assume that most if not all of the same risks apply.

As with other stimulants, the chronic use of propylhexedrine can be considered highly addictive, and is capable of causing psychological and physiological dependence among certain users. When addiction has developed, cravings and withdrawal effects may occur if a person suddenly stops or drastically decreases their usage.

Tolerance to the effects of this compound likely occurs in the same general fashion as with amphetamine rapidly develops with prolonged and repeated use.[4][5] This results in users having to administer increasingly large doses to achieve the same effects. After that, it takes about 3 - 7 days for the tolerance to be reduced to half and 1 - 2 weeks to be back at baseline (in the absence of further consumption). Propylhexedrine presents cross-tolerance with all dopaminergic stimulants, meaning that after the consumption of propylhexedrine all stimulants will have a reduced effect.

Like with amphetamine and methamphetamine the evidence on effective treatments for dependence and abuse is limited.[6] In light of this, fluoxetine and imipramine appear to have some limited benefits in treating abuse and addiction[6]

Like with the abuse of methamphetamine, propylhexedrine abuse can result in a stimulant-induced psychotic state that may present with a variety of symptoms (e.g., paranoia, hallucinations, delusions), though likely to a lesser degree.[8][9] A review on treatment for amphetamine, dextroamphetamine, and methamphetamine abuse-induced psychosis states that about 5–15% of users fail to recover completely.[9][10] The same review asserts that, based upon at least one trial, antipsychotic medications effectively resolve the symptoms of acute amphetamine psychosis.[9]