From PsychonautWiki
(Redirected from Neurotransmitters)
Jump to navigation Jump to search 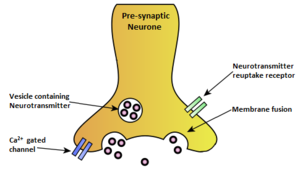 Neurotransmitters are chemicals that transmit signals from a neurone to a target cell across a synapse. They are stored in chemical packages known as vesicles and are found in the end of the neurone. Upon arrival of an action potential, neurotransmitters are released into the synapse where they then diffuse and bind to receptors on the post-synaptic neurone.

Neurotransmitters can be classified as one of four different types, shown below with examples: 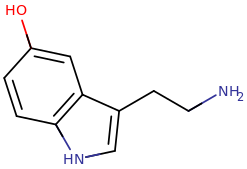 Serotonin, an example of a common neurotransmitter.

Here are some examples of important neurotransmitter actions: