Methylphenidate (also known as MPH, MPD, and the trade names Ritalin, Concerta, and Methylin, among others) is a classical stimulant substance of the phenidate class. It is the parent compound of the substituted phenidates, a family of stimulants that includes ethylphenidate, isopropylphenidate, and others. The mechanism of action involves increasing concentrations of the neurotransmitters dopamine and norepinephrine.

It was first synthesized in 1944 and was approved for medical use in the United States in 1955. It was originally sold by Swiss company CIBA (now Novartis).[2] It is approved for treatment of attention-deficit hyperactivity disorder (ADHD) and narcolepsy. It is often used by students with or without ADHD as a cognitive enhancer and study aid.

Subjective effects include stimulation, focus enhancement, motivation enhancement, increased libido, appetite suppression, and euphoria. It is usually taken orally, but can also be insufflated or administered rectally. The effects are comparable to those of amphetamine; however, it is reported to produce less euphoria and generally have less recreational value. Some users also report it produces a stronger comedown relative to amphetamine.

It has moderate abuse potential. Chronic use (i.e. high dose, repeat administration) is associated with compulsive redosing, escalating tolerance, and psychological dependence. It is highly advised to use harm reduction practices if using this substance.

Methylphenidate was first licensed by the U.S. Food and Drug Administration (FDA) in 1955 for treating what was then known as "hyperactivity."[citation needed] Although it was prescribed to patients as early as 1960, it only became heavily prescribed in the 1990s when the diagnosis of ADHD itself became more widely accepted.[3][4]

It was estimated that the number of doses of methylphenidate used globally in 2013 increased by 66% compared to 2012.[5] In 2019, it was the 51st most commonly prescribed medication in the United States, with more than 14 million prescriptions.[6][7] It is available as a generic medication.

It is structurally similar to amphetamine, featuring a substitution at Rα which is incorporated into a piperidine ring ending at the terminal amine of the phenethylamine chain. Additionally, it contains a methyl acetate bound to Rβ of its structure.

Four isomers of methylphenidate are possible, since the molecule has two chiral centers. One pair of threo isomers and one pair of erythro are distinguished, from which primarily d-threo-methylphenidate exhibits the pharmacologically desired effects.[8] 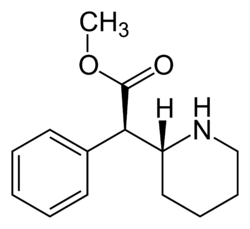 While both amphetamine and methylphenidate are dopaminergic, it should be noted that their methods of action are somewhat distinct. Specifically, methylphenidate is a dopamine reuptake inhibitor while amphetamine is both a releasing agent and reuptake inhibitor of dopamine and norepinephrine. Each of these drugs have a corresponding effect on norepinephrine which are weaker than their effects on dopamine.

Methylphenidate's mechanism of action at dopamine-norepinephrine release is still debated, but is fundamentally different from most other phenethylamine derivatives as methylphenidate is thought to increase general firing rate, whereas amphetamine reduces firing rate and reverses the flow of the monoamines via TAAR1 activation.[12][11][13][14]

In terms of its tolerance, methylphenidate can be used multiple days in a row for extended periods of time and is often prescribed to be used in this way. Tolerance to many of the effects of methyphenidate develops with prolonged and repeated use. This results in users having to administer increasingly large doses to achieve the same effects.[22]

In the case of acute (i.e. one-off) exposure, it generally takes about 3 - 7 days for the tolerance to be reduced to half and 1 - 2 weeks to be back at baseline (in the absence of further consumption).[citation needed] Methylphenidate presents cross-tolerance with all dopaminergic stimulants, meaning that after the consumption of methyphenidate all stimulants will have a reduced effect."[citation needed]

As with other stimulants, the chronic use of methylphenidate can be considered moderately addictive with a high potential for abuse and is capable of causing psychological dependence among certain users. When addiction has developed, cravings and withdrawal effects may occur if a person suddenly stops their usage.

Methylphenidate has some potential for abuse due to its action on dopamine transporters. Methylphenidate, like other stimulants, increases dopamine levels in the brain. However, at therapeutic doses this increase is slow and thus euphoria only rarely occurs even when it is administered intravenously.[23] The abuse and addiction potential of methylphenidate is therefore significantly lower than other dopaminergic stimulants.[23][24]

The abuse potential is increased when methylphenidate is crushed and insufflated (snorted) or injected.[25]. It should be noted that due to the fillers in the pill, however, that this can be harmful to the nasal cavities, and intravenous use can cause emphysema (a lower respiratory tract disease, aka ritalin lung when caused by Ritalin tablets). The intravenous use of methylphenidate, commonly marketed as Ritalin and widely used as a stimulant drug in the treatment of attention deficit hyperactivity disorder, can lead to emphysematous changes known as Ritalin lung.

. The primary source of methylphenidate for abuse is the diversion from legitimate prescriptions rather than illicit synthesis. Those who use methylphenidate medicinally generally take it orally as instructed while intranasal and intravenous are the preferred means for recreational use.[26]

Chronic use (i.e. high dose, repeat dosing) may increase the risk of psychosis.[25][27] The safety profile of short-term methylphenidate therapy has been well-established, with short-term clinical trials revealing a very low incidence (0.1%) of methylphenidate-induced psychosis at therapeutic dose levels.[28]

Methylphenidate (when taken orally) has a low bioavailability around 30%. If taken with alcohol (ethanol), blood plasma levels of dexmethylphenidate are increased by up to 40%.[29] A metabolite called ethylphenidate is also formed.[30]

Internationally, methylphenidate is a Schedule II drug under the Convention on Psychotropic Substances.[33]

It is a widespread myth that methylphenidate could lead to false-positives for amphetamine in drug screenings. However, there was found no immunoassay cross reactivity in laboratory study.[41]