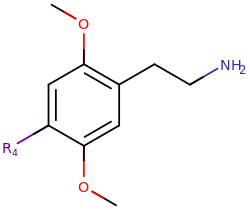 The general structure for a 2C-x compound

Substituted dimethoxyphenethylamines (also known as 2C-x) is the general name for the family of psychedelic phenethylamines originally studied by Alexander Shulgin. Shulgin first synthesized most of the 2C-x chemicals in the 1970s and later published his findings in his book PiHKAL. He also coined the term 2C, being an acronym for the 2 carbon atoms between the benzene ring and the amino group. The 2C-x chemicals vary in effect from being totally inactive to fully psychedelic. Some of the most popular members of this group include 2C-B, 2C-E, and 2C-I.

All derivatives of 2,5-dimethoxyphenethylamine have a phenethylamine backbone with two methoxy groups in positions 2 and 5 of the aromatic ring and they further contain different lipophilic substituents in position 4.

The phenethylamine backbone consists of a phenyl ring joined to an amine group through an ethyl chain. All compounds in the 2C-x series consist of this as their core structure.

Other compounds, derivated from 2,5-dimethoxyphenethylamine

The 2C-x chemicals, as with many other serotonergic psychedelics, should not be taken in combination with SSRIs (selective serotonin reuptake inhibitor) or tricyclic antidepressants in general to avoid serotonin syndrome, a potentially life-threatening condition in which an abundance of serotonin is built up the body, causing many physical and cognitive health problems.