Nicotine is a naturally-occurring stimulant substance of the pyridine and pyrrolidine classes. It is the principal alkaloid found in the nightshade family of plants.[1] It produces its effects by binding to nicotinic acetylcholine receptors (nAChRs).[2]

As the chief ingredient of the tobacco used in cigarettes, cigars, and snuff, nicotine is one of the most widely used substances in the world.[3] It is also used as an antiherbivore agent to deter plant predation and has been used as an insecticide in the past. [4]

Unlike many other psychoactive substances, nicotine in the form of tobacco is reported to have a unique biphasic effect in which inhaling it in short puffs produces a stimulant effect, while deep drags produces a relaxing one. Nicotine overdoses, even mild ones, are reported to be highly unpleasant and result in significant nausea and light-headedness.

Nicotine is well-studied and known to be highly addictive. At sufficiently high doses, it can potentially be deadly, though serious or fatal overdoses are rare. The major harms of nicotine addiction are associated with the negative health effects of chronic tobacco smoking, which include heart disease and various forms of cancer.[citation needed] While the link between tobacco use and cancer is well-established, various roles of nicotine in cancer initiation have also been found.[5]

Crude nicotine was known by 1571, and the compound was obtained in purified form in 1828; the correct molecular formula was established in 1843, and the first laboratory synthesis was reported in 1904.

Nicotiana rustica has been used by the Mapacho (South America)[6] and the thuoc lao (thuốc lào) (Vietnam) people for spiritual purposes.

Both optical enantiomers of nicotine are active, with the naturally occurring levorotatory enantiomer being more active and more toxic than the dextrorotatory. In its basic form, it is an oily liquid that is miscible with water. However, as a nitrogenous base, nicotine readily forms stable, water-soluble salts when acidified.

Once it reaches the brain, nicotine stimulates the release of many neurotransmitters and hormones, including acetylcholine, norepinephrine, epinephrine, arginine vasopressin, serotonin, dopamine, and β-endorphin[7][8], which are responsible for the majority of its psychoactive effects.

By increasing the level of acetylcholine in the brain, nicotine enhances concentration. Norepinephrine release causes increased alertness and arousal. With low doses, nicotine enhances the action of norepinephrine and dopamine, which produces typical psychostimulation. Nicotine also has sedative effects as produced by the release of β-endorphin (which reduces anxiety) and enhances the action of serotonin and opioids (which causes sedation).[citation needed]

Nicotine has a half-life of 1 - 2 hours when administered in a single dose and an active metabolite (cotinine) with a half-life of 20 hours. Nicotine and cotinine are further glucuronidated by UGT2B10.[9] 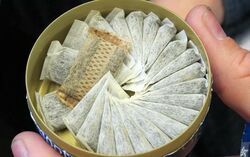 The most common source of nicotine is Nicotiana tabacum, constituting 0.6% - 3.0% of its dry weight.[11] It is also present in other species of Nightshade (Solanaceae), such as Aztec tobacco (Nicotiana rustica). Tobacco for smoking is most commonly sold as cigarettes but may also be sold as cigars, which differ from cigarettes by having a tobacco leaf wrapper instead of the paper wrapper used in cigarettes. Loose tobacco for hand-rolling cigarettes and cigars, or for smoking in pipes/hookahs is also commonly available. Tobacco products not intended for smoking are also marketed. These include snuffs which are insufflated and chewing tobacco, also known as snus.

Nicotine is also extracted from tobacco and reformulated into products intended to assist users who wish to cease use of tobacco products like cigarettes. Popular products include sublingual lozenges and sprays, skin patches, inhalers, and solutions used for oral use or in conjunction with a vaporizer.

More recently, nicotine in liquid forms (commonly called e-liquid) intended for vaporizing in electronic cigarettes has become popular as an alternative to smoking. Unlike products intended to assist in smoking cessation, e-cigarettes are not typically licensed or marketed as medical devices. This can lead to E-cigarettes containing additives that can be dangerous such as: Diacetyl (chemical linked to lung disease called bronchiolitis obliterans or better known as "popcorn lung"), Diethylene glycol (ingredient used in antifreeze, linked to lung diseases), Heavy metals (usually nickel, tin, or lead), benzene (A VOC found in car exhaust),and Acrolein (a herbicide, can cause irreversible lung damage).[12]

Dipping tobacco (dip, chew, chaw, snuff, etc.) is a form of tobacco that is cut in fine, medium, long, or extra long cut shreds and is placed in the gingiva of either side and floor of the mouth. It is fermented, unlike Swedish snus, which is pasteurized. It is known to produce excess saliva that needs to be spat out, otherwise the user may experience nausea. It gives a buzz and feeling of lightheadedness to the user. Dip may be put into pouches to produce an Americanized version of Swedish snus.

Snus, is a Swedish form of tobacco that is ground down, then put into small, soft pouches (often made of a similar material to tea bags), which the user puts in the space under the upper lip and gum (gingiva). Nicotine passes into the bloodstream through the process of diffusion. Snus is available without any taste additives as a natural taste, but is also available in various taste options: menthol, vanilla, bergamot, citrus and others.

The tobacco is treated with brine and sodium carbonate for strength and then either fermented or pasteurized in a heat processor. After this, the snus is treated with aromas and flavors accordingly. "Wet snus" intended for oral use is, therefore, not entirely different from chewing tobacco.[13]

Nicotine has an estimated oral LD50 of 6.5 - 13 mg/kg in humans, which is much lower than many other common stimulants. It is unlikely that overdose can be achieved by smoking tobacco. However, coadministration with other sources of nicotine such as patches or gum may potentially be dangerous.

Nicotine readily passes through the dermis and into the bloodstream upon contact with skin, so safety precautions should be taken when handling it in its pure form.

Flavored e-liquids intended for use in e-cigarette devices can present a particular danger to children, and there have been cases recorded where children have mistakenly consumed e-liquid products with fatal results.[15]

Nicotine activates the reward system (mesolimbic pathway) of the brain, which is responsible for its addictive nature. Because of this, tobacco smoking is extremely addictive with a high potential for abuse. When addiction has developed, cravings and withdrawal effects may occur if a person suddenly stops their usage.

Chronic use of nicotine, as with many other addictive substances, downregulates the production of dopamine and other stimulatory neurotransmitters and also desensitizes nicotinic acetylcholine receptors. In response, the brain upregulates the number of receptors presented. The net effect is an increase in sensitivity to the reward system; the opposite of the decrease in sensitivity as caused by addictive substances like cocaine and heroin.

In some people, it can take as little as one or two cigarettes before reaching 100% tolerance. This means a decreased dizziness from smoking. Nicotine leaves the system very rapidly. The half-life of nicotine in the brain is about 90 minutes. In 8 or 9 hours, the brain has cleared the active drug completely.[16]

Tolerance to the effects of this compound rapidly develops with prolonged and repeated use. This results in users having to administer increasingly large doses to achieve the same effects. After that, it takes about 3 - 7 days for the tolerance to be reduced to half and 1 - 2 weeks to be back at baseline (in the absence of further consumption). Nicotine does not present a cross-tolerance with other dopaminergic stimulants, meaning that after the use of nicotine all stimulants will not have a reduced effect.

Following discontinuation of nicotine, receptors may take several months to return to baseline.

Nicotine has been indicated in the increased frequency of congenital disabilities and has been correlated with the increase of attention deficit hyperactivity disorder in children.

Nicotine is legal nearly all over the world and is one of the most popularly used substances. The sale of tobacco products are usually restricted to adults, and they are often heavily taxed.