Kratom behaves as an opioid receptor agonist similar in function to morphine and other opiates, although its pharmacological action and subjective effects differ significantly from those of traditional opiates.[9]

Additionally, kratom contains the alkaloid rhynchophylline, which functions as an NMDA receptor antagonist.[15] This may be responsible for the mild dissociating effects which occur at heavy doses.

Another popular theory, supported by a report from a visit to Indonesia Kratom farms [16], say that once harvested, fresh leaves are dried, and depending of the procedure followed, they will be used to make different types of kratom. Once leaves are dry, they crumble them and have the skeleton of the leaf left behind, which they call bones. We call them veins. Veins/bones are not mixed up into most vendors powder except for the small amount used in white. That said, some vendors will add a small amount of bones to all their product, again it depends on their preference. In general, bones are discarded with the exception of the small amount put into white. Bones are allegedly stimulating.

There are several different ways that kratom is typically ingested:[17]

It is likely impossible to achieve this using kratom in its standard leaf form as the nausea ceiling makes it difficult to consume high enough dosages without vomiting. A pure extract or tincture, however, may be potent enough to cause lethal respiratory depression at appropriate dosages, although oral administration of pure mitragynine to mice in dosages up to 920 mg/kg did not produce lethal respiratory depression.[23] However, kratom can be fatal when it is combined with other depressants such as alcohol or benzodiazepines.

Side effects associated with chronic kratom use include loss of appetite and weight loss, constipation, decreased libido, apathy, and darkening of the skin color of the face. Chronic use has been associated with bowel obstruction.[5][24]

Three case reports document deaths involving kratom. Other drugs were used in all cases, and in one, kratom was speculated to possibly be the primary cause of death.[25][26] O-Desmethyltramadol (ODSMT) was present in the latter case, and has been found to be a frequent additive in certain commercial brands of kratom,[27] there were nine cases of death reported in Sweden in 2010 and 2011 relating to use of Krypton, which was kratom mixed with O-Desmethyltramadol.[28]

As with other opioids, the kratom produces dependence with chronic use and has a high abuse potential. When dependence has developed, cravings and withdrawal symptoms may occur if a person suddenly stops their usage.[29]

Chronic kratom use may lead to tolerance to the effects of serotonergic psychedelics due to kratom's antagonism of the 5-HT2A receptor[30] and said receptor's paradoxical down-regulation in response to inhibitors.[31]

Since kratom is classified as an herbal supplement and remains legal in many states, a subset of individuals mistakenly assume that it can be used regularly and eventually discontinued without any withdrawal symptoms. In reality, most individuals who use kratom on a regular basis will experience some withdrawal symptoms following cessation. [32] 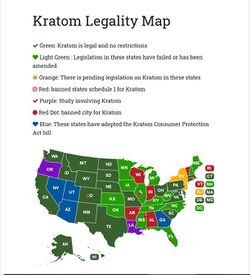 This map shows the legal status of kratom within each US state. It is currently a controlled substance within Wisconsin, Arkansas, Tennessee, Indiana, Rhode Island, and Vermont.[34]