Disconnective effects are defined as any subjective effect which feels as if it detaches or disconnects one from the external environment, their senses, and their consciousness.

These effects are typically associated with dissociative hallucinogens and likely occur due to the way in which these compounds function as NMDA receptor antagonists. This means they bind to the receptor, but do not activate it and block other neurotransmitters from doing so. The result is a dose-dependent decrease in the passing of electrical signals across the brain and an overall disconnection of neurons, which leads to states of disconnection between conscious parts of the brain and its sensory organs.

This page lists and describes the various disconnective effects which can occur under the influence of certain psychoactive compounds.

Cognitive disconnection is the experience of feeling distant and detached from one's sense of identity, thought stream, and general cognitive processes. This leads into states such as depersonalisation, derealisation, memory suppression, "ego death" and a general array of cognitive suppressions. The experience of this can also create a wide range of subjective changes to a person's perception of their own consciousness. These are described and documented in the list below:

Cognitive disconnection is often accompanied by other coinciding effects such as visual disconnection and tactile disconnection. This results in the sensation that one is partially or completely detaching from both their sensory input and their conscious faculties. It is a near universal effect under the influence of moderate dosages of dissociative compounds, such as ketamine, PCP, and DXM.

Déjà Vu (or Deja Vu) is defined as as any sudden inappropriate impression of familiarity of a present experience with an undefined past.[1][2][3][4] Its two critical components are an intense feeling of familiarity, and a certainty that the current moment is novel.[5] This term is a common phrase from the French language which translates literally into “already seen”. It is a well-documented phenomenon that can commonly occur throughout both sober living and under the influence of hallucinogens.

Within the context of psychoactive substance usage, many compounds are commonly capable of inducing spontaneous and often prolonged states of mild to intense sensations of déjà vu. This can provide one with an overwhelming sense that they have “been here before”. The sensation is also often accompanied by a feeling of familiarity with the current location or setting, the current physical actions being performed, the situation as a whole, or the effects of the substance itself.

This effect is often triggered despite the fact that during the experience of it, the person can be rationally aware that the circumstances of the “previous” experience (when, where, and how the earlier experience occurred) are uncertain or believed to be impossible.

Déjà vu is often accompanied by other coinciding effects such as olfactory hallucinations and derealization.[6] It is most commonly induced under the influence of moderate dosages of hallucinogenic compounds,[7] such as psychedelics,[8] cannabinoids,[9] and dissociatives.

This article does not represent an individual subjective effect component but instead serves as a generalised leveling system which can be applied to the simultaneous experience of disconnective effects such as cognitive, physical, and visual disconnection. These effects are most commonly induced under the influence of light to heavy dosages of dissociative compounds, such as ketamine, PCP, and DXM.

This process of sensory and cognitive detachment can be broken down into the 5 basic levels of intensity described below:

Physical disconnection is the experience of feeling distant and detached from one's sense of touch and their feelings of ownership and control over their own physical body. This leads into states such as tactile suppression, physical autonomy, pain relief, changes in felt bodily form, a perception of bodily lightness, and a general array of physical suppressions. The experience of this effect can also create a wide range of subjective changes to a person's perception of their own body. These are described and documented in the list below:

Physical disconnection is often accompanied by other coinciding effects such as cognitive disconnection and visual disconnection in a manner which results in the sensation that one is partially or completely detaching from both their sensory input and their cognitive faculties. This effect is most commonly induced under the influence of moderate dosages of depressant and dissociative compounds, such as, ketamine, PCP, and DXM. 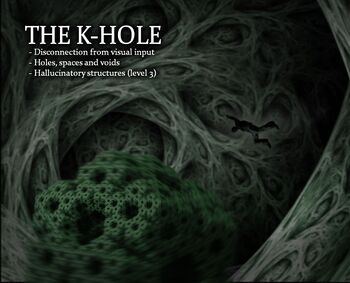