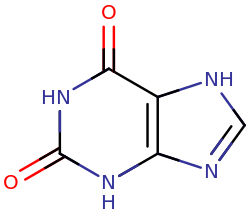 The chemical structure of xanthine

Xanthines (also known as substituted xanthines) are a chemical class of psychoactive substances derived from xanthine, an organic compound found in most human body tissues and fluids as well as in other organisms. Examples of xanthines include caffeine and theobromine.[1] These are commonly used for their effects as both stimulants and bronchodilators.

The chemical structure of xanthine is composed of a purine base hydrogenated at R3 and R7 and two ketone substitutions at R2 and R6. The hydrogen atoms bound to the amino groups can be substituted by other functional groups to derive drugs of various potency, pharmacology and efficacy. For example, caffeine is a substituted xanthine with methyl groups at R1, R3, and R7.

Xanthines act through several mechanisms, but their most important effect is to counteract a substance called adenosine that naturally circulates at high levels throughout the body (especially in the nervous system). In the brain, adenosine generally plays a protective role, part of which is to reduce neural activity levels. The principal mode of action behind xanthines are as nonselective antagonists of adenosine receptors.[citation needed]

Xanthine compounds are structurally similar to adenosine, and are thus capable of binding to adenosine receptors on the surface of cells without activating them, thereby acting as a competitive inhibitor.[2]