(R)-Modafinil (also known as Armodafinil and by the brand names Nuvigil, Artvigil, and Waklert[1]) is a eugeroic substance of the benzhydryl class. Armodafinil is the enantiopure formulation of modafinil (brand name Provigil). As opposed to the racemic formulation, which contains a 50/50 mix of both the (S) and (R) enantiomers, armodafinil consists of just the (R)-enantiomer of modafinil.

Armodafinil was approved by the U.S. Food and Drug Administration (FDA) in June 2007 for the treatment of obstructive sleep apnea, shift work sleep disorder, and narcolepsy.[2]

In addition to its wakefulness-promoting effects and ability to increase locomotor activity in animals, armodafinil can produce rewarding psychoactive and euphoric effects such as alterations in mood, perception, thinking, and feelings typically observed with other central nervous system (CNS) stimulants in humans.

A study in which patients were administered modafinil, methylphenidate, and a placebo found that modafinil produces "psychoactive and euphoric effects and feelings consistent with methylphenidate."[3] Relative to modafinil, armodafinil reaches its peak concentration in the blood later after administration than modafinil does, which may make it more effective at improving wakefulness in patients with excessive daytime sleepiness.[citation needed]

The long-term risks of regular armodafinil intake have yet to be studied in detail.[citation needed] 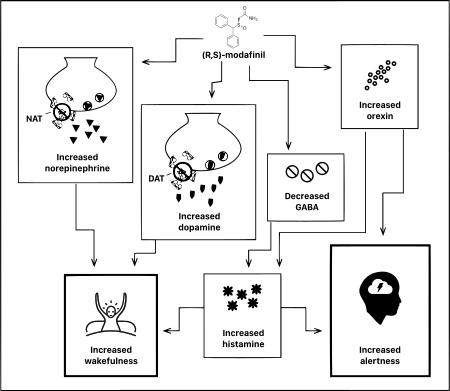 Although the exact mechanisms by which modafinil and its R-enantiomer, armodafinil, decrease sleepiness are not fully understood, evidence suggests that these agents promote wakefulness by acting directly or indirectly on many components of the sleep / wake circuit. Modafinil and armodafinil are hypothesized to inhibit GABA and promote dopamine, norepinephrine, histamine, and hypocretin / orexin.[4][5][6][7]

Modafinil and its R-enantiomer, armodafinil, increase both norepinephrine (NE) and dopamine (DA), possibly via their blockade of both the NE and DA reuptake transporters (NET and DAT, respectively). The actions of NE at alpha-adrenergic receptors and DA at dopamine D2 receptors are thought to contribute to the wake-promoting properties of modafinil. Orexin is a key component of the arousal system; thus, the hypothesized action of modafinil on the orexinergic system may help increase alertness. Additionally, modafinil may indirectly increase histamine, either by reducing GABAergic inhibition of histaminergic neurons or via actions at orexinergic neurons. The increase in histamine may contribute to both the wake-promoting effects of modafinil as well as the potential of modafinil to increase alertness.[4][6][8]

In comparison to traditional stimulants such as amphetamine, this compound induces an experience which is far less forceful, recreational and euphoric. It instead focuses on general wakefulness and motivation enhancement. In comparison to regular modafinil it is usually considered to be less side effect intensive, more comfortable and with a longer duration.

The long-term safety and effectiveness of armodafinil has not been determined.[15]

Anecdotal evidence suggests a lack of adverse health effects when sparingly used at small to moderate doses, although this must not be assumed. This compound is a commonly prescribed prescription medication, thus is considerably less likely to have adverse health effects than that of a typical research chemical.

The median lethal dose at which 50% of participants die (LD50) from either armodafinil or modafinil for human beings has never been reached. No life-threatening effects have taken place in clinical trials involving the administration of 1000mg to 1600mg of modafinil per day for 7 to 21 consecutive days. Intentional acute overdoses of 4500mg and 4000mg in two adult subjects and an accidental ingestion of 800mg by a three-year-old child did not result in any life-threatening effects or death.[16] After overdosing on 5000mg of modafinil in a suicide attempt, a fifteen-year-old female reported a severe headache, nausea, and tachycardia, but did not appear to have any lethal or long-term effects.[17]

Armodafinil, like racemic modafinil, may also possess addiction reinforcing properties, as evidenced by its self-administration in monkeys previously trained to administer cocaine; armodafinil was also partially discriminated as stimulant-like. The chronic use of armodafinil can be considered as mildly addictive with a low potential for abuse. It does not seem to be capable of causing psychological dependence among certain users.

Tolerance to many of the effects of armodafinil develops with prolonged and repeated use. This results in users having to administer increasingly large doses to achieve the same effects. After that, it takes about 3 - 7 days for the tolerance to be reduced to half and 1 - 2 weeks to be back at baseline (in the absence of further consumption). Armodafinil may present a cross-tolerance with all benzhydryl nootropics, meaning that after the consumption of armodafinil, certain nootropics such as modafinil and adrafanil may have a reduced effect.

Armodafinil is legally approved for medical purposes worldwide. However, it is illegal to sell and possess without a prescription in most countries.