2-Fluoroamphetamine (also known as 2-FA) is a novel stimulant substance of the amphetamine class. It is a structural analog of amphetamine and is presumed to possess a similar mechanism of action, promoting the release of dopamine and norepinephrine in the brain.

2-FA is part of a series of amphetamine analogs that first appeared on the online research chemical market in the 2010s.[1][2] These compounds include 2-FMA, 3-FA, 3-FEA and 4-FA and are reported to produce a range of stimulating and euphoric effects, many of which have been used as research chemical substitutes for classical street stimulants and entactogens.[citation needed] Of these, 2-FA is considered to be most amphetamine-like in its subjective effects. It is commonly compared to the d-isomer of amphetamine (dexedrine).

2-FA is commonly taken orally. While capable of being taken via insufflation or vaporization, this has been reported to be highly unpleasant and noxious compared to its parent compound. Despite some users reporting efficacy as an alternative to prescription stimulants for ADHD, little is known about the potential toxicological effects that accompany its long-term use as a substitute for prescribed stimulants.

Very little data exists about the pharmacological properties, metabolism, and toxicity of 2-FA. It is highly advised to use harm reduction practices if using this substance. 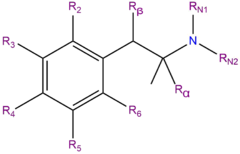 Generic structure of a amphetamine molecule

Although 2-FA has not been formally studied on the same level as traditional amphetamines, it is safe to assume that just like other substituted amphetamines with substitutions at similar positions (with the notable exception of 4-FA), it most likely acts primarily as both a dopamine and norepinephrine releasing agent. This means it effectively increases the levels of the norepinephrine and dopamine neurotransmitters in the brain by binding to and partially blocking the transporter proteins that normally clear those monoamines from the synaptic cleft. This allows dopamine and norepinephrine to accumulate within the brain to extra-endogenous levels, resulting in stimulating, motivating and euphoric effects.

In comparison to other substituted amphetamines, 2-FA is reported to be relatively free of side effects such as nausea, high blood pressure, anxiety and an uncomfortable offset ("comedown"). It is considered to be a functional and effective psychoactive substance for performing general productivity tasks in a manner that is similar to dextroamphetamine. However, at higher doses, it reportedly loses its productivity and attention-enhancing effects and begins to take on a recreational character due to the distracting euphoria and overstimulation that can result. However, it is often said that it possesses a "ceiling dose" that purportedly lowers the abuse threshold relative to methamphetamine, although this has yet to be scientifically demonstrated.

The toxicity and long-term health effects of recreational 2-FA use do not seem to have been studied in any scientific context and the exact toxic dosage is unknown. This is because 2-FA has very little history of human usage. Anecdotal evidence from people who have tried 2-FA within the community suggest that there do not seem to be any negative health effects attributed to simply trying this drug at low to moderate doses by itself and using it sparingly (but nothing can be completely guaranteed). Others have commented that its d-isomer form is virtually similar to the effects of d-amphetamine, and thus far little has been shown to give reason to suspect that its toxicity is radically different (though future evidence to the contrary may prove otherwise).

It is perhaps worth noting that in the field of medicinal chemistry, the fluorine substitution is sometimes seen as desirable in central nervous system pharmaceutical agents, and is a common practice due to the corresponding increase in lipophilicity granted by the substitute.[3]

As with other stimulants, the chronic use of 2-FA can be considered moderately addictive with a high potential for abuse and is capable of causing psychological dependence among a certain population of users. When dependence or addiction has developed, cravings and withdrawal effects may occur if a person suddenly stops their usage.

Tolerance to many of the effects of 2-FA develops with prolonged and repeated use. This results in users having to administer increasingly large doses to achieve the same effects. After that, it takes about 3 - 7 days for the tolerance to be reduced to half and 1 - 10 days to be back at baseline (in the absence of further consumption). 2-FA presents cross-tolerance with all dopaminergic stimulants, meaning that after the consumption of 2-FA all stimulants will have a reduced effect (especially including atypical stimulants one might not expect, like MDMA due to its reliance on dopamine and norepinephrine to exert its full euphoric effect).

In a analogous way tolerance to amphetamine relates to tolerance on methamphetamine, 2-FA has been observed to have a similar relationship to its more popular relative, 2-FMA.

Abuse of compounds within the amphetamine chemical class at high dosages for prolonged periods of time can potentially result in a stimulant psychosis that may present with a variety of symptoms (e.g., paranoia, hallucinations, or delusions).[4] A review on treatment for amphetamine, dextroamphetamine, and methamphetamine abuse-induced psychosis states that about 5–15% of users fail to recover completely.[4][5] The same review asserts that, based upon at least one trial, antipsychotic medications effectively resolve the symptoms of acute amphetamine psychosis.Cite error: Closing </ref> missing for <ref> tag[6]

2-FA is currently a grey area compound within all parts of the world, meaning its regulation lies in a legal grey area and that it is not known to be specifically illegal ("scheduled") within any country. However, people may still be charged for its possession under certain circumstances such as under analogue laws and with intent to sell or consume.