gamma-Butyrolactone (also known as γ-butyrolactone and commonly as GBL) is a synthetic depressant substance of the lactone chemical class that produces powerful euphoric and disinhibiting effects similar to that of alcohol intoxication. In humans it acts as a prodrug for GHB, where 1ml is equivalent to 1.66 grams of the sodium salt of GHB (Sodium oxybate).[citation needed]

GBL is a common solvent and reagent in chemistry and is also used as a flavoring, stain remover, wheel cleaner, superglue remover, paint stripper, and as a solvent in some wet aluminum electrolytic capacitors.[citation needed] It has also been found in some wine products, which suggests it may be a naturally occurring substance (see section below).

GBL, along with 1,4-butanediol, are known to dissolve most types of plastic over time.[2] For this reason, it is recommended to only transport and store the drug using a glass container, standard gelatin capsules (not vegetarian), or high-density polyethylene plastic (also known as #2 recyclable plastic). To check the type of plastic used on a bottle, one can look at the bottom for a number in the triangle shaped recycling label. GBL reacts and breaks down various forms of plastic (including plastic lids) within seconds and will float to the bottom of a container while dissolved plastic moves up. It is currently unknown how far plastic can be broken down, but there may be serious consequences when ingesting microplastics. To avoid this, do not handle GBL at any stage with ordinary plastic, for example with plastic syringes or glass bottles with an ordinary plastic cap. The liquid should be perfectly clear and colorless.

GBL has reportedly been used as date rape drug (as a legal alternative to GHB), in which it is secretly put dropwise into drinks but there is little evidence to support it being widespread, especially compared to alcohol due to its strong taste. GBL and GHB are also referred to as "K.-o.-Tropfen" (K.-o.-drops) in German-speaking countries. Care should be taken when offered drinks from strangers.

GBL (gamma-butyrolactone) is a cyclic ester of gamma-hydroxybutanoic acid. GBL can be synthesized from GHB through dehydration of the terminal hydroxy groups, forming a saturated lactone ring. Structurally, GBL is a five-membered ring with an oxygen substituent at R1, adjacent from the oxygen atom in the ring, forming a cyclic ester called a lactone.

Physically, it is a hygroscopic colorless oily liquid with a weak characteristic odor and is soluble in water.

GBL has been found in extracts from samples of unadulterated wines.[3] This finding indicates that GBL is a naturally occurring component in some wines and may be present in similar products. The concentration detected was approximately 5 μg/mL and was easily observed using a simple extraction technique followed by GC/MS analysis.

It can also be found in cheese flavorings but typically results in a content of 0.0002% GBL in the final foodstuff.[4]

Due to its chemical similarity, GBL can easily be converted into GHB by calendistine laboratories in a one-step synthesis.[citation needed]

GBL is presumably not active in its own right; its mechanism of action stems from its identity as a prodrug of GHB[5]. Hoewever, GBL may display other effects on the body, unlike GHB, but it is currently not known. It is theorized to induce a state of metabolic acidosis, a significant medical condition, especially when used for longer periods of time.[6]

It is rapidly converted into GHB by lactonase enzymes found in the blood.[5] GBL is more lipophilic (fat soluble) than GHB, and so is absorbed faster and has higher bioavailability; paradoxically this can mean that GBL has a faster onset of effects than GHB itself, even though it is a prodrug. 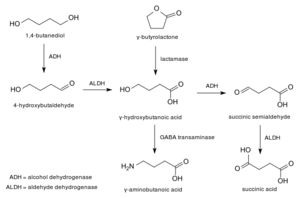 The levels of lactonase enzyme can vary between individuals, meaning that first-time users can show unpredictable results, even from small doses. In many this manifests as slow onset of effects, followed by headaches, semi-consciousness which is distinct from GBL sleep in normal users. If the user decides to try again at a later date, they appear to be able to enjoy the effects normally. Because of these pharmacokinetic differences, GBL tends to be more potent and faster-acting than GHB, but has a shorter duration; whereas the related compound 1,4-butanediol (1,4-B) tends to be slightly less potent, slower to take effect but longer-acting than GHB.

It is also worth noting that these effects will not necessarily occur in a predictable or reliable manner, although higher doses are more liable to induce the full spectrum of effects. Likewise, adverse effects become increasingly likely with higher doses and may include addiction, severe injury, or death ☠. {{effects/base

Reportedly, GBK is very similar to GHB. More muscle relaxing and less prone to give clonic muscle movements than GHB. Slightly longer acting, and has a more sedative feeling than GHB. May easily give gastrointestinal disturbances like nausea, diarrhoea and gas. Comment: It is not clear if ingesting butyrolactone is toxic or not. It is not cancerogenic as some sources say, but is probably not good for you. The taste is extremely disagreeable.[7]

GBL is not active in its own right; its mechanism of action stems from its identity as a prodrug of GHB, meaning that it is rapidly converted into GHB in the body.

GBL is not considered to be as safe as GHB used responsibly or medicinally, since it is theorized to display additional toxic effects on the body, unlike GHB. The LD50 is above the active dosage, and there is no danger of acute toxicity. However, it can become dangerous when used as a recreational drug or abused. There have been many negative reports from recreational users who have overdosed, combined GBL with alcohol or other drugs, or accidentally dosed themselves unexpectedly or way above the common dosage range.

To avoid a possible overdose of GBL, it is important to start with a low dose and work your way up slowly by increasing the dosage in small increments. One should best use a glass bottle with an integraded 1ml pipette to exactly measure their dosages.

Accidental ingestions of GBL have also occurred due to inadequate storage methods. If GBL is put into a clear liquid, glass, or bottle, it can be easily mistaken for water. It is recommended to clearly label your GBL in writing and dye the liquid with blue food coloring so it no longer resembles a drinkable beverage. It is also recommended to store your GBL in a container that no one would drink out of.

GBL itself may also produce neurotoxic effects, in addition to the effects of GHB, to which it is converted to by the body.[5]

In multiple studies, GHB has been found to impair spatial memory, working memory, learning and memory in rats with chronic administration.[13][9][10][11] These effects are associated with decreased NMDA receptor expression in the cerebral cortex and possibly other areas as well.[12]

One study found that repeated administration of GHB to rats for 15 days drastically reduced the number of neurons and non-neuronal cells within the hippocampus and in the prefrontal cortex. With once daily doses of 10 mg/kg of GHB, they were decreased by 61% in the hippocampus region and 32% in the prefrontal cortex, and with 100 mg/kg, they were decreased by 38% and 9%, respectively. This paper demonstrates contradicting effects on neuronal loss, with lower doses (10 mg/kg) producing the most neurotoxicity, and higher doses (100 mg/kg) producing less.[14]

This table compares the withdrawal symptoms of GHB/GBL, benzodiazepines, and alcohol.[15]

GBL is possibly highly physically and moderately to highly psychologically addictive. The frequent use of GBL can cause withdrawal symptoms similar to those caused by other depressants such as alcohol and benzodiazepines if abruptly discontinued, reportedly with a much faster onset and more severe symptoms when used frequently. Withdrawal effects from GBL build faster than with GHB.[16][17] These symptoms seem to depend on the dosage and the length of time the drug was used for. Light to moderate users often experience anxiety, insomnia, sleep-related problems, and tremors whereas heavy use can cause severe withdrawal symptoms like delirium, psychosis, and hallucinations, which some anecdotal reports suggesting the effects to be more severe than other depressants.[18][15]

GHB, when used medicinally (two medicinal doses per day, four hours apart), creates little to no dependance while the more frequent one uses GHB, it causes exponentially more dependance and withdrawal symptoms. It is though that GBL also shares this trait, although there is no medicinal dose for GBL that is safe.[19]

Although there have been reported fatalities due to GHB/GBL withdrawal, reports are inconclusive and further research is needed.[20]

Tolerance will develop to the sedative-hypnotic effects within several days of continuous use. After cessation, the tolerance returns to baseline in 7 - 14 days. Withdrawal symptoms or rebound symptoms may occur after ceasing usage abruptly following a few days or longer of steady dosing, and may necessitate a gradual dose reduction to minimize neurotoxicity from withdrawal. It is proposed that GHB and especially GBL can lead to dependence at a significantly faster rate than longer-acting depressants.