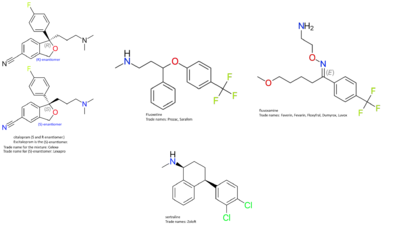 Escitalopram is an SSRI sold under the brand name Lexapro in the United States. Escitalopram is indicated for the treatment of major depressive disorder and anxiety disorders. It is the s-enantiomer of citalopram, and both have similar efficacy. Escitalopram was FDA approved in 2002.[11]

Fluoxetine is an SSRI commonly sold under the brand name Prozac. Fluoxetine is indicated for the treatment of major depressive disorder, bulimia nervosa, obsessive-compulsive disorder, panic disorder, and premenstrual dysphoric disorder. Fluoxetine is sometimes used in conjunction with olanzapine (an atypical antipsychotic) to treat bipolar I disorder as well as treatment-resistant depression.[12] A single pill medication called Symbyax is a combination of olanzapine and fluoxetine.[13] Fluoxetine is on the World Health Organization's list of essential medicines, a list of medicines needed for a basic and effective health system.[14] Fluoxetine was first FDA approved in 1987.

Fluvoxamine is an SSRI that is used to treat obsessive-compulsive disorder. Fluvoxamine was first approved by the FDA in 1994.[15] Fluvoxamine has the greatest affinity for the σ1 (sigma-1) receptor, where it acts as an agonist, which may contribute to its biological effects.[16]

Sertraline is an SSRI that is sold under the brand name Zoloft. Sertraline is used to treat major depressive disorder, obsessive-compulsive disorder, post-traumatic stress disorder, anxiety disorders, panic disorder, and premenstrual dysphoric disorder. Sertraline was first FDA approved in 1991.[18]Unlike most SSRIs, sertraline, has somewhat significant activity at the dopamine transporter protein[19] and could be considered a serotonin-dopamine reuptake inhibitor.