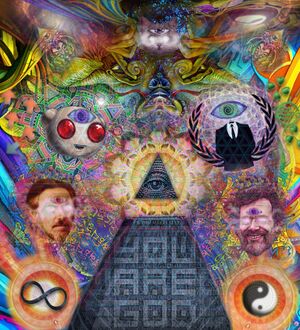 The internet's transcension - A humorous composition piece created by Josikins to serve as an example of psychedelic artwork. The selected images represent the artist's most significant personal influences in regards to their exploration of the field of psychonautics.

Psychonautics is defined as a methodology for discovering altered or non-ordinary states of consciousness — typically those produced by meditation and hallucinogenic substances — as well as to a phenomenological research paradigm which attempts to navigate these states to gain deeper insight into the nature, structure, and processes of the human psyche and unconscious mind.[1]

The term has been diversely applied to cover all activities in which altered states are systematically utilized to investigate, augment, or enhance the human condition. These activities include the ritual and ceremonial practices of traditional shamanism, various forms of meditation, trance, yoga, lucid dreaming, sensory deprivation, and the controlled use of hallucinogenic or entheogenic substances.

A person who endeavors to explore altered states for such purposes may be called a psychonaut.

The term psychonautics derives from psychonaut, which is derived from the Ancient Greek words ψυχή psychē (i.e. "soul", "spirit", or "mind") and ναύτης naútēs (i.e. "sailor" or "navigator").[2]

The term is usually attributed to the German author Ernst Jünger, who first used it to describe the pharmacologist Arthur Heffter in his 1970 essay Annäherungen: Drogen und Rausch (translated as "Approaches: Drugs and Ecstatic Intoxication"), which also draws on his own extensive drug experiences.[2][3] In this essay, Jünger draws many parallels between drug-induced experiences and physical exploration—for example, the danger of encountering hidden "reefs."[3]

Author Peter J. Carroll chose Psychonaut as the title of a 1982 book which documents the experimental use of meditation, ritual and psychoactive substances in the exploration of consciousness and of psychic phenomena, which he refers to as "chaos magic".[4] The term's first published use in an academic context can be traced to ethnobotanist Jonathan Ott in 2001.[5]

Clinical psychiatrist Dr. Jan Dirk Blom describes psychonautics as denoting "the exploration of the psyche by means of techniques such as lucid dreaming, sensory deprivation, and the use of hallucinogens or entheogens." He describes the psychonaut as one who "seeks to investigate their mind using intentionally induced altered states of consciousness" for spiritual or scientific research purposes.[2]

Psychologist Dr. Elliot Cohen of Leeds Metropolitan University and the U.K. Institute of Psychosomanautics defines psychonautics as "the means to study and explore consciousness (including the unconscious) and altered states of consciousness." Cohen claims that psychonautics "rests on the realization that to study consciousness is to transform it" and that it is "associated with a long tradition of historical cultures worldwide."[citation needed] Leeds Metropolitan University is currently the only university in the United Kingdom to offer a module in psychonautics.

Distinction from recreational substance use

The aims and methods of psychonautics (when mind-altering substances are involved) can be distinguished from those of ordinary recreational drug use. While typically viewed as some of the most powerful tools for such purposes, the use of mind-altering substances is considered but one of a holistic array of methods that share the therapeutic goals of facilitating self-insight and personal growth, and is usually employed in a spiritual, ritual, research, or otherwise controlled setting.

In contrast, recreational substance use is primarily sought out for purposes other than self-exploration, such as pleasure-seeking or socializing. Although these two concepts can often manifest themselves as a byproduct of substance usage, an important point of divergence between the two contexts depends entirely on the user's intentions, desired and actualized outcomes.

Note: The methods listed above may be used in combination, and should not be considered exhaustive. For example, archaic traditions such as shamanism may combine ritual, fasting, and hallucinogenic substances.