Sensory deprivation is the reduction or removal of stimuli (input) from one or more of the senses for the purpose of altering consciousness.

Sensory deprivation can be accomplished using a variety of methods ranging from using simple devices such as blindfolds or hoods and earmuffs to cut off one's sense of vision (sight) and audition (hearing) to more complex devices that can be used to cut off one's sense of olfaction (smell), gustation (taste), somatosensation (touch), thermoception (temperature), and proprioception ("gravity," position, movement).

In addition to the traditional physical senses, sensory deprivation can include the so-called perceptual senses such as chronoreception (the experience of time passing), sense of personal agency, as well as the sense of recognizability or familiarity of a situation.[citation needed] Sensory deprivation has found applications in various alternative medicines as well as psychological experiments.

Deliberate sessions of sensory deprivation are often described as relaxing and conducive to meditative states of altered consciousness. However, extended or forced sensory deprivation such as those found in prison conditions can result in extreme anxiety, hallucinations,[1] bizarre thoughts, and depression.[2] In this context, it can be considered a form of psychological torture.[3]

In the context of psychonautics, sensory deprivation techniques are one of the common alternative techniques used to explore non-ordinary states of consciousness that do not require the use of hallucinogens or other psychoactive substances (although they are sometimes used together in combination).

Self-experiments involving sensory deprivation are typically associated with the use of isolation tanks (also known as float or flotation tanks) which are lightless, soundproof tanks with high Epsom salt (magnesium sulfate) content filled with salt water at skin temperature that allows users to float effortlessly. The ability to induce sensory deprivation in an isolation tank is sometimes thought of as a technological shortcut to accessing deep states of concentration meditation, which aims to reduce the attention given to input from one's senses.

Less encompassing forms of sensory deprivation can be used to alter or enhance the effects of psychoactive substance experimentation, as in the case of using blindfolds or placing oneself in dark spaces while under the influence of hallucinogens like psilocybin mushrooms or LSD. This practice has been reported to enhance their visualization or introspective qualities, often in ways that increase their therapeutic effects (although it should be noted that it can have the opposite effect depending on the individual and the experimental conditions). 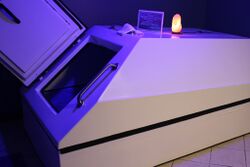 Origins of the isolation tank

The American physician, neuroscientist, and psychonaut John C. Lilly is credited with the invention and promotion of the use of isolation tanks as a means of sensory deprivation for the aim of exploring consciousness.[4] He devised the first isolation tank in 1954 while at the National Institute of Mental Health, driven by the desire of isolating the brain from external stimulation to study its experiential effects.[5] He would later come to be introduced to psychedelic substances such as LSD and later, ketamine, which he would combine with the use of isolation tanks in order to document their effects, which he wrote about extensively in his many books.[6]

It should be noted that the concept of depriving one's senses for the purpose of consciousness exploration is not a modern phenomenon. For example, advanced practices in Taoism and Tibetan Buddhism include the "dark retreat," which is a solo retreat in a space that is entirely absent of light. Because there is no optical stimulation, one can experience phenomena like the "prisoner's cinema (a type of spontaneously generated "light show" hallucination) as well as profound alterations in sensation, cognition, and perception.

Depending on the tradition, the period of time that can be dedicated to dark retreats can vary from a few hours to decades. For example, a dark retreat in the Himalayan tradition is a restricted practice reserved only for the senior spiritual practitioner under appropriate spiritual guidance. It is still occasionally practiced today in Tibetan Buddhist traditions, where it is considered an advanced sadhana (spiritual or ritual practice).[7][8]

Some other spiritual traditions have used similar techniques in the pursuit of wisdom and insight. In Colombia, the Kogi people spend nine years in dark caves or huts; in Europe, the darkroom appeared as a network of tunnels; in Egypt, as the Pyramides; and for Taoists in China, as caves.[citation needed]