From PsychonautWiki
(Redirected from Neurontin)
Jump to navigation Jump to search

Fatal overdose may occur when gabapentinoids are combined with other depressants such as opiates, benzodiazepines, barbiturates, thienodiazepines, alcohol or other GABAergic substances.[1]

Gabapentin (also known as Neurontin) is a depressant substance of the gabapentinoid class. It is a structural analog of the neurotransmitter GABA and acts by inhibiting certain calcium channels in the brain namely α2δ subunit-containing voltage-dependent calcium channels (VGCCs).[3]

Gabapentin was originally developed to treat epilepsy and is currently FDA approved to treat postherpetic neuralgia in adults and as an adjunctive therapy in the treatment of partial onset seizures. It is often prescribed off-label for restless leg syndrome, social anxiety disorder, panic disorder, and generalized anxiety disorder.[4][5][6]

Subjective effects include mild to moderate anxiety suppression, pain relief, and muscle relaxation. Its analgesic and anxiolytic effects provide gabapentin with some recreational potential in a manner that can be compared to a mild benzodiazepine. However, these recreational effects are reported to diminish quickly with repeated usage and are typically reported by those who do not have a tolerance to this compound.

Gabapentin is considered to have low abuse potential compared to most recreational depressants. However, chronic use can lead to physical dependence. Additionally, there is a risk of fatal overdose when it is combined with other depressants (a somewhat common practice considering its weak effects). It is highly advised to use harm reduction practices if using this substance.

Gabapentin is a 3,3-disubstituted derivative of GABA. Therefore, it is a GABA analogue, as well as a γ-amino acid.[12] Specifically, it is a derivative of GABA with a pentyl disubstitution at 3 position, hence, the name - gabapentin, in such a way as to form a six-membered ring. After formation of the ring, the amine and carboxylic groups are not in the same relative positions as they are in the GABA:.[13] they are more conformationally constrained.[14]

Gabapentin, or 1-(aminomethyl)cyclohexylacetic acid, is an analogue of the neurotransmitter GABA. It contains a cyclohexane ring bound to a methylamino chain CH3NH2. At the same location, R1, the cyclohexane ring is also substituted with an acetic acid group. Gabapentin is structurally analogous to GABA. GABA contains an amino group bound to the terminal carbon of a butanoic acid chain. The structure of gabapentin contains the secondary carbon R3 of the butanoic acid chain in GABA incorporated into an attached cyclohexane ring, converting it into a tertiary carbon while still maintaining the chain.

Gabapentin modulates the action of glutamate decarboxylase (GAD) and branched-chain aminotransferase (BCAT), two enzymes involved in GABA biosynthesis. In human and rat studies, gabapentin was found to increase GABA biosynthesis, and to increase non-synaptic GABA neurotransmission in vitro.[15] As the GABA system is the most prolific inhibitory receptor set within the brain, its increase in biosynthesis results in the sedating and anxiolytic (or calming effects) of gabapentin on the nervous system.

Another study[16] based on magnetic resonance imaging done at 7 Tesla confirms that Gabapentin appears to increase cerebral GABA concentrations acutely, in vivo, by up to 79% from baseline.

Gabapentin, as a gabapentinoid, has also been shown to bind to the α2δ-1 subunit of Voltage-Gated Calcium Channels to act as a VGCC blocker, which contributes to its inhibitory, analgesic, and anxiolytic effects.[17] It is uncertain exactly how this method of action contributes to gabapentin's psychoactive effects.

Gabapentin transporter saturation occurs when large enough doses of gabapentin are consumed in a short enough period of time to result in the body being unable to absorb any more gabapentin, causing a significant reduction in bioavailability, which largely accounts for the drop in bioavailability seen with increasing doses.

Gabapentin is a potent activator of voltage-gated potassium channels KCNQ3 and KCNQ5, even at low nanomolar concentrations. However, this activation is unlikely to be the dominant mechanism of gabapentin's therapeutic effects.[19]

The decreasing bioavailability of gabapentin can be lessened by taking lower doses more often instead of higher doses less frequently. As a general rule, using any more than 250-300 mg of gabapentin every 30-45 minutes will result in wasting a significant portion of the total dose of gabapentin, although this number varies depending on the individual. Alkaline environments inhibit the absorption of gabapentin, so lowering the pH of one's stomach using acidic substances (such as soft drinks) will boost bioavailability as well. It is generally not recommended to take antacids 2 hours before or after taking gabapentin, because although not dangerous, it will severely lower the total absorption of gabapentin.[20] 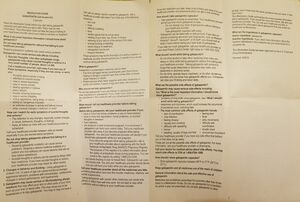 This document, provided with prescription gabapentin, contains detailed information regarding its toxicity and harm potential.

GABApentin has a low toxicity relative to dose. The most common side effects of gabapentin in adult patients include dizziness, fatigue, drowsiness, weight gain, and peripheral edema (swelling of extremities).[22] Gabapentin may also produce sexual dysfunction in some patients whose symptoms of which may include loss of libido, inability to reach orgasm, and erectile dysfunction.[23] Gabapentin should be used carefully in patients with renal impairment due to possible accumulation and toxicity.[24]

In 2009, the U.S. Food and Drug Administration issued a warning of an increased risk of depression and suicidal thoughts and behaviors in patients taking gabapentin (along with other anticonvulsant drugs),[25] modifying the packaging insert to reflect this. A 2010 meta-analysis confirmed the increased risk of suicide associated with gabapentin use.[21]

In 2010, a study conducted by Patorno E, Bohn RL, Wahl PM, et al, found that the use of gabapentin compared to the use of topiramate may be associated with an increase in suicidal acts and or violent deaths.[26]

It should be noted that in both studies along with others that the patients evaluated had a higher suicide risk and the studies were both limited and imprecise.[21]

People who accidentally or intentionally overdose may experience drowsiness, sedation, blurred vision, slurred speech, somnolence and possibly death (if a very high amount was taken and particularly if combined with alcohol). Serum gabapentin concentrations may be measured to confirm diagnosis.[27]

Gabapentin is not considered psychologically addictive. However, it is possible to develop a physical dependence on the drug. In fact, people can experience withdrawal symptoms for up to 45 days after they stop taking gabapentin. Although gabapentin does give some people a euphoric “high” which can cause abuse, gabapentin abusers do not present with the kind of compulsive, drug-seeking behavior or strong cravings associated with other more common depressants such as opioids, alcohol or benzodiazepines.

Tolerance will develop to the anxiolytic effects with prolonged continuous usage. After cessation, the tolerance returns to baseline in 7-14 days. Withdrawal symptoms or rebound symptoms may occur after ceasing usage abruptly following a few weeks or longer of steady dosing and may necessitate a gradual dose reduction.

Gabapentin is a prescription-only medicine and can only be prescribed following a consultation with a doctor.[citation needed]