From PsychonautWiki
(Redirected from Det)
Jump to navigation Jump to search

Diethyltryptamine (also known as N,N-DET or DET) is a synthetic psychedelic tryptamine and a close structural analog of DMT (Dimethyltryptamine). It is extremely uncommon and has little history of human usage.

In the 1950s, the endogenous production of psychoactive agents was considered to be a potential explanation for the hallucinatory symptoms of some psychiatric diseases; this is known as the transmethylation hypothesis.[1]

Early studies of DET as well as other psychedelics were mainly focused on their presumed psychotomimetic properties. Researchers theorized that abnormal metabolites of endogenous chemicals such as tryptamine, serotonin, and tryptophan could be the explanation for mental disorders such as schizophrenia, or psychosis.[2] 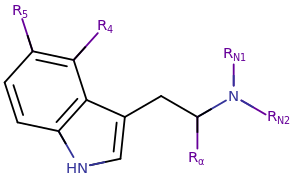 DET, or N,N-diethyltryptamine, is a synthetic indole alkaloid molecule of the tryptamine class. Tryptamines share a core structure comprised of a bicylic indole heterocycle attached at R3 to an amino group via an ethyl side chain. DMT contains two ethyl groups CH2CH3- bound to the terminal amine RN of its tryptamine backbone. DET has many substituted analogues such as 4-HO-DET ("ethocin").

DET is an analogue of the common tryptamine hallucinogen N,N-Dimethyltryptamine or DMT. Although DET is a synthetic compound with no known natural sources, it has been used in conjunction with the mycelium of Psilocybe cubensis to produce the synthetic chemicals 4-PO-DET (Ethocybin) and 4-HO-DET (Ethocin), as opposed to the naturally occurring 4-PO-DMT (Psilocybin) and 4-HO-DMT (Psilocin). Isolation of the alkaloids resulted in 3.3% 4-HO-DET and 0.01-0.8% 4-PO-DET.[3]

Due to the lack of research regarding the substance, all discussion regarding the pharmacology of it is purely based on its structure and subjective effect similarities to other tryptamine psychedelics such as psilocin and DMT. With this in mind, DET is thought to act as an 5-HT2A partial agonist. Unlike DMT, the ethyl groups add protection against the monoamine oxidase enzyme system, allowing DET to be orally active, while DMT is not.

DET is sometimes preferred over DMT because it can be taken orally, whereas DMT cannot. This is because the enzyme monoamine oxidase degrades DMT into an inactive compound before it is absorbed. To overcome this, it must be administered in a different manner, i.e. intravenously, intramuscularly, by inhalation, by insufflation, rectally, or ingested along with an inhibitor of monoamine oxidase. Because DET has ethyl groups attached to its nitrogen atom, monoamine oxidase is unable to degrade it. This is also true for many other tryptamines with larger nitrogen substituents.

There are currently 0 anecdotal reports which describe the effects of this compound within our experience index.

The toxicity and long-term health effects of recreational DET has not been studied in any scientific context and the exact toxic dose is unknown. This is because DET is a research chemical with a limited history of human usage. However, it is presumed to have a similar toxicity profile as DMT due to similarities in their chemical structure.

Anecdotal reports from those who have tried DET suggests that there are no negative health effects attributed to simply trying the substance by itself at low to moderate doses and using it very sparingly (but nothing can be completely guaranteed). Independent research should always be done to ensure that a combination of two or more substances is safe before consumption.

Although no formal studies have been conducted, it is believed that DET is not habit-forming and the desire to use it can actually decrease with use.

Tolerance to the effects of DET is built almost immediately after ingestion. After that, it takes about 3 days for the tolerance to be reduced to half and 7 days to be back at baseline (in the absence of further consumption). DET presents cross-tolerance with all psychedelics, meaning that after the consumption of DET all psychedelics will have a reduced effect.

Internationally, DET is a Schedule I substance under the Convention on Psychotropic Substances.[5]