From PsychonautWiki
(Redirected from 3meopcmo)
Jump to navigation Jump to search

3-MeO-PCMo (4-[1-(3-methoxyphenyl)cyclohexyl]morpholine) is a new morpholine analogue of 3-MeO-PCP. It is a dissociative NMDA receptor antagonist, sigma receptor[1] agonist and anesthetic drug of the arylcyclohexylamine chemical class with a potency of less than 1/10th of that of 3-MeO-PCP.

This compound induces a state referred to as "dissociative anesthesia" when ingested and is therefore used as a recreational drug. 3-MeO-PCMo has recently become easily accessible through online research chemical vendors[2] where it is being sold as a designer drug.

Although very little is known about this compound, similar morpholine analogues of phencyclidine have been researched before.[3][4] 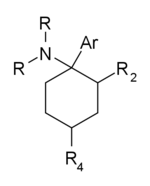 3-MeO-PCMo, or 4-[1-(3-methoxyphenyl)cyclohexyl]morpholine, is classified as an arylcyclohexylamine drug. Ayrlcyclohexylamine drugs are named for their structures which include a cyclohexane ring bound to an aromatic ring along with an amine group at the same location. The aryl substituent of 3-MeO-PCMo is a phenyl ring with a methoxy (CH3-O-) substituent at R3, which is bound to a six-membered cyclohexyl ring. Bound at the same location on the cyclohexyl ring R1 is an amine group which is incorporated into a morpholine ring as R4.

Due to the lack of research regarding the substance, all discussion regarding the pharmacology of it is purely based on its structure and subjective effect similarities to other arylcyclohexylamine dissociatives such as 3-MeO-PCP, PCP and MXE. With this in mind, 3-Meo-PCMo is thought to act as an NMDA receptor antagonist. NMDA receptors allow for electrical signals to pass between neurons in the brain and spinal column; for the signals to pass, the receptor must be open. Dissociatives close the NMDA receptors by blocking them. This disconnection of neurons leads to loss of feeling, difficulty moving, and eventually this substance's equivalent of the “K-hole.”

Anecdotal reports which describe the effects of this compound within this experience index include:

The toxicity and long-term health effects of recreational 3-MeO-PCMo use do not seem to have been studied in any scientific context and the exact toxic dosage is unknown. This is because 3-MeO-PCMo has very little history of human usage. Anecdotal evidence from people who have tried 3-MeO-PCMo within the community suggest that there do not seem to be any negative health effects attributed to simply trying this drug at low to moderate doses by itself and using it sparingly (but nothing can be completely guaranteed). Independent research should always be done to ensure that a combination of two or more substances is safe before consumption.

It is strongly recommended that one use harm reduction practices when using this substance to ensure the administration of the intended dose.

As with other NMDA receptor antagonists, the chronic use of 3-MeO-PCMo can be considered moderately addictive with a high potential for abuse and is capable of causing psychological dependence among certain users. When addiction has developed, cravings and withdrawal effects may occur if a person suddenly stops their usage.

Tolerance to many of the effects of 3-MeO-PCMo develops with prolonged and repeated use. This results in users having to administer increasingly large doses to achieve the same effects. After that, it takes about 3 - 7 days for the tolerance to be reduced to half and 1 - 2 weeks to be back at baseline (in the absence of further consumption). 3-MeO-PCMo presents cross-tolerance with all dissociatives, meaning that after the consumption of 3-MeO-PCMo all dissociatives will have a reduced effect.

In terms of its long-term health effects when used repeatedly and with excess for extended periods of time, 3-MeO-PCMo seems to exhibit almost identical bladder and urinary tract problems to those found within ketamine, MXE and other arylcyclohexylamines, but to an even more extreme extent. This is because 3-MeO-PCMo is 50% less potent than that of ketamine which means significantly more of the drug must be consumed in order to achieve the same effects. Symptoms of 3-MeO-PCMo-induced cystitis can become extremely serious and can be described as:

All of these, however, can easily be avoided by simply not using 3-MeO-PCMo on a daily or even weekly basis and manually limiting one's usage of the substance.

3-MeO-PCMo is currently thought to be a legal grey area drug worldwide and is easily accessible through the use of online research chemical vendors. However, this does not guarantee anyone to be immune from legal prosecution should they be found in possession of this substance as the legality is likely to vary from country to country.