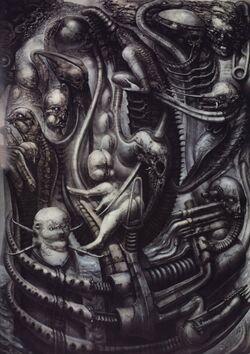 Unspeakable horrors are defined as the experience of prolonged exposure to indescribable scenarios and hallucinatory content of a scary and disturbing nature which are often directly influenced by a person's fears. This can occur during high dose hallucinogenic experiences, particularly those in which the user is currently undergoing negative emotional stressors and personal problems of an introspective nature.

Although the content which comprises these states are generally ineffable and largely dependent upon the fears of those who experience them, certain themes and archetypes often manifest themselves. These are not limited to but may consist of:

The experience of this component and how it is interpreted by those who undergo it seems to differ wildly between people. While most individuals can find this state to be traumatizing if unprepared, many people find that, although terrifying, it is potentially exhilarating and character building in equal measure. To ensure that one does not find themselves in this state unwittingly, heavy dosages of hallucinogens should be avoided without prior practice, and a person should always work their way up to the higher levels from lower dosages in small increments as they feel comfortable doing so.