From PsychonautWiki
(Redirected from Property:Runny nose)
Jump to navigation Jump to search 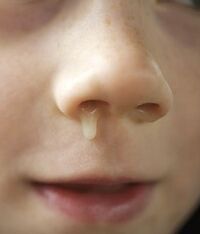 An image which depicts a child with a runny nose.

A runny nose can be described as a condition where the nasal cavity is filled with a significant amount of mucous fluid, otherwise known as "snot". This occurs relatively frequently within healthy human beings and is a common symptom of allergies or certain diseases, such as the common cold or hay fever. It can also be a side effect of crying and exposure to cold temperatures.

A runny nose is often accompanied by other coinciding effects such as excessive yawning, increased salivation, increased phlegm production, and watery eyes. It is most commonly induced under the influence of heavy dosages of tryptamine psychedelic compounds, such as psilocybin, 4-AcO-DMT, and 4-HO-MET. However, it can also occur under the influence of opioid withdrawals[1]) and as a symptom of cocaine abuse.[2]