From PsychonautWiki
(Redirected from Diamorphine)
Jump to navigation Jump to search

Diacetylmorphine or morphine diacetate (also known as diamorphine and heroin as well as colloquially as H, dope, smack, junk, brown, boy, and others) is a semi-synthetic opioid substance of the morphinan class. It is a derivative of morphine, a natural product of the opium poppy (Papaver somniferum).[citation needed] Heroin is known for its highly addictive properties and it makes up a large portion of the illicit traffic in narcotics.

Heroin was first synthesized from morphine by a British chemist in 1874 and was introduced as a commercial product by the Bayer Company of Germany in 1898.[2] Although the name heroin is a trade name, it has since been widely adopted for all intents and purposes and may describe a recreational depressant that may or may not contain pure diacetylmorphine.

In its pure form, heroin is active at doses of 5 mg and above; however, the substance is most commonly found in a preparation containing significant impurities. These impurities can result from including processing faults during synthesis, the addition of harmful or benign cutting agents, or the substitution of significantly more potent and dangerous analogous substances such as fentanyl adulterated into the end-product before distribution.[3][4][5][6][7] The heroin found on streets may have a significant variation in purity, but on average is about 5%. This makes accurate dosing particularly difficult.

Diacetylmorphine was originally synthesized by C.R. Alder Wright in 1874 when attempting to combine morphine with various acids. The synthesis was achieved through boiling anhydrous morphine with morphine alkaloid with acetic anhydride.[2]

Although the name heroin is a traditional trade name for a Bayer product containing diacetylmorphine, the name has since been widely adopted for all intents and purposes and may describe a recreational depressant that may or may not contain pure diacetylmorphine.

Heroin, or morphine diacetate or diacetylmorphine (diamorphine hydrochloride), is an opiate and an ester of morphine. Heroin and other molecules of this class contain a polycyclic core of three benzene rings fused in a zig-zag pattern called a phenanthrene. A fourth nitrogen containing ring is fused to the phenanthrene at R9 and R13, with the nitrogen member looking at R17 of the combined structure. This structure is called morphinan.

Heroin, along with other morphinans, contains an ether bridge between two of its rings, connecting R4 and R5 through an oxygen group. Heroin contains two acetate (CH3COO−) groups bonded to R3 and R6 of its structure, and a methyl group located on the nitrogen atom at R17. On the same ring containing the 6-acetyl group, heroin contains a double bond.

Heroin's chemical structure is closely related to morphine. Heroin is the 3,6-diacetyl derivative of the diol morphine, meaning it contains acetate functional groups at the same locations hydroxy groups are found in morphine (3,6). Heroin is analogous to the other morphinans including dihydrocodeine, codeine, ethylmorphine, hydrocodone, and oxycodone.

Heroin itself is an inactive drug, but it is metabolized into morphine when inserted into the body.[8] When taken orally, heroin undergoes extensive first-pass metabolism via deacetylation, making it a prodrug for the systemic delivery of morphine.[8] When the drug is injected, however, it avoids this first-pass effect, very rapidly crossing the blood–brain barrier because of the presence of the acetyl groups which render it much more fat-soluble, and thus more potent, than morphine itself.[9]

Once in the brain, it is deacetylated variously into the inactive 3-monoacetylmorphine and the active 6-monoacetylmorphine (6-MAM). 6-MAM is found in some commercially prepared batches of black tar heroin, often found on the west coast of the United States. It is then deacetylated into morphine, which binds to μ-opioid receptors. Heroin itself exhibits relatively low affinity for the μ receptor, suggesting that much of the psychoactive effects of the substance come from the metabolites of heroin rather than the diacetylmorphine itself.[10]

The recreational effects of this compound, including cognitive euphoria and physical euphoria, occur because opioids structurally mimic endogenous endorphins which are naturally produced within the body and are also active on the μ-opioid receptor set in the brain. The way in which synthetic opioids such as heroin structurally mimic these natural endorphins results in their euphoric, pain relief and anxiolytic effects. This is because natural endorphins are responsible for reducing pain, causing sleepiness, and feelings of pleasure. The endorphins can be released in response to pain, strenuous exercise, orgasm, or general excitement. 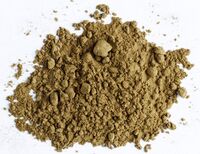 Above is heroin in its typical and most common form: a dusty brown powder. 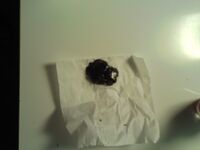 Above is "black tar" heroin as commonly seen on the west coast of the U.S..

This form of heroin is diacetylmorphine acetate, a product of heroin production that does not require further acetylation. It differs in texture from powder heroin in that it is black, gooey, viscous, and a texture ranging from quite similar to wet asphalt and a hard rock of material. It is commonly produced in South America and is found on the western coast of the USA.

The actual chemical contents of black tar heroin can vary from the white powder form. Black tar might contain a variable mixture of morphine derivatives, predominantly 6-MAM (6-monoacetylmorphine) which is another result of crude acetylation that occurs in the clandestine manufacturing process.

When injected into any type of tissue, this form of heroin results in an increased risk of wound botulism[12]. Wound botulism can be fatal and leads to amputations and death at a higher rate of black tar heroin users. Because of the consistency of the substance (tar-like), it can pose a greater risk for collapsing, damaging, or infecting veins. This damage to veins leads to a higher chance of subcutaneous and intradermal injection[13] which is not advocated from a harm reduction point of view. For users who do choose to inject this substance, it is advised to follow the procedures found in the safer injection guide.

Like many other opioids, unadulterated heroin at appropriate dosages does not cause many long-term complications other than physical and psychological dependence and constipation. Outside of the extremely powerful addiction and physical dependence, the harmful or toxic aspects of opioid usage are exclusively associated with not taking the necessary precautions in regards to its administration, overdosing and using impure heroin products that contain harmful additives.

Heavy dosages of heroin can result in severe respiratory depression which can result in dangerous or even fatal levels of anoxia (oxygen deprivation). This occurs because the breathing reflex is suppressed by agonism of µ-opioid receptors - this effect is proportional to the dosage of the substance consumed.

Due to the nature of the unregulated drug market, illicit heroin is of widely varying and unpredictable purity. A user may prepare what they consider to be a moderate dose while actually taking far more than intended in the event of obtaining a purer product than they are used to, or may be cut unknowingly with more potent and dangerous substances such as fentanyl.[15] Depending on drug interactions and numerous other factors, death from overdose can take anywhere from several minutes to several hours and is a direct result of respiratory depression leading onto anoxia (oxygen deprivation) resulting from the breathing reflex being suppressed by agonism of µ-opioid receptors. Some sources quote the median lethal dose (for an average 75 kg opiate-naive individual) as being between 75 and 600mg.[16]

Heroin can also cause nausea and vomiting; a significant number of deaths attributed to opioid overdose are caused by aspiration of vomit by an unconscious victim. This is when an unconscious or semi-conscious user who is lying on their back vomits into their mouth and unknowingly suffocates. It can be prevented by ensuring that one is lying on their side with their head tilted downwards so that the airways cannot be blocked in the event of vomiting while unconscious (also known as the recovery position).

In case of a suspected or known overdose, it is advised to administer a dose of naloxone intravenously, intramuscularly, or nasally to reverse the effects of opioid agonism[17].

It is strongly recommended that one use harm reduction practices such as volumetric dosing, when using this substance to ensure the administration of the intended dose (especially due to the unusually high risk of an overdose this substance presents.)

As with other opioids, the chronic use of heroin can be considered extremely addictive with a high potential for abuse and is capable of causing psychological and physical dependence among certain users. When psychological or physical addiction has developed, mental and physical withdrawal symptoms and cravings may occur if a person suddenly stops their usage.

Tolerance to many of the effects of heroin develops with prolonged and repeated use. The rate at which this occurs develops at different rates for different effects, with tolerance to the constipation-inducing effects developing particularly slowly for instance. This results in users having to administer increasingly large doses to achieve the same psychoactive effects of a previously lower dose. After heroin tolerance has developed, it takes about 3 - 7 days for the tolerance to be reduced to half and 1 - 2 weeks to be back at baseline (in the absence of further consumption). Heroin presents cross-tolerance with all other opioids, meaning that after the consumption of heroin all opioids will have a reduced effect.

The risk of fatal heroin overdoses rise sharply after a period of cessation and relapse, largely because of reduced tolerance.[18] When users dose their old doses, they no longer have the physical tolerance to handle the sedative effects of heroin and overdose occurs. To account for this lack of physical tolerance, it is safer to only dose a fraction of one's usual dosage if using after a prolonged period of sobriety. It has also been found that the environment one is in can play a role in tolerance: in one scientific study, rats with the same history of heroin administration were significantly more likely to die after receiving their dose in an environment not associated with the drug in contrast to a familiar environment.[19]