From PsychonautWiki
(Redirected from Coaxil)
Jump to navigation Jump to search

Tianeptine (trade names Stablon and Coaxil) is an atypical antidepressant. While primarily a prescription drug, it is sometimes used in high doses for recreational opioid effects. It has a unique and poorly-understood mechanism of action consisting of modulation of the brain's monoaminergic system.

While tianeptine is classified as a tricyclic antidepressant (TCA), its pharmacological effects differ from those of typical antidepressants.[1] This is primarily due to the fact that it is not thought to act immediately through the regulation of monoaminergic neurotransmitters (such as serotonin, dopamine, or noradrenaline.) Rather, it is theorized to act upon glutamate and glutamatergic mechanisms, causing the brain to adapt more readily to stress and depression.[2] Clinical trials of tianeptine suggest that it is just as effective as other, more popular antidepressants such as fluoxetine (i.e., SSRI) and amitriptyline (i.e., TCA). However, tianeptine seems to exhibit fewer side effects and complications than traditional antidepressants.[3]

In addition to its antidepressant effects, tianeptine also exhibits anxiolytic (anti-anxiety) properties, specifically having shown promise in the treatment of panic disorders.[4] Tianeptine also displays neuroprotective properties and has been shown to improve cognition in patients with depression.[5][6] Tianeptine's anxiolytic and mood-boosting effects, in addition to its purposed neuroprotective and cognitive benefits, make it a popular nootropic.[7]

Subjective effects of recreational doses include sedation and/or stimulation, anxiety suppression, motivation enhancement, and euphoria. Prescription guidelines indicate that tianeptine should be taken in 12.5 mg doses and taken three times daily, waiting 3-4 hours between doses.[8] However, doses of 12-35 mg are more commonly used by recreational users.

It is worth noting that very little is known about the potential toxicity of recreational tianeptine use. Some users have reported that its opioid effects can cause both physical and psychological dependence like traditional opioids (e.g. heroin, morphine, hydrocodone). It is highly advised to use harm reduction practices if using this substance.

Tianeptine is a tricyclic antidepressant, as its molecular structure is composed of three cyclic compounds.[9] Despite tianeptine's chemical similarity to other TCAs, its effects and mechanisms are unique.[10]

Like many drugs, tianeptine can be manufactured into various salt forms to achieve maximum bioavailability, absorption, and overall effectiveness. Tianeptine is most commonly found in its sodium salt form because it is the only version that is sold by pharmacies and prescribed by doctors. However, the sulfate salt is now also being marketed on nootropic vendor sites, suggested as being superior to the sodium salt, especially with respect to having a longer half-life and duration.[11]

There is no formal research to suggest any increased efficacy of the sulfate form, but anecdotal reports from users suggest that it may be more effective and have a longer duration than the sodium salt.[12][13] The sulfate form is not more potent, but it is metabolized slower by the body, thus making a single dose per day more effective. Anecdotal reports by users of both salt forms indicate that because the sulfate is metabolized more slowly, there is less potential for addiction. The sulfate form appears to provide a more level experience as opposed to the sodium form, which reaches its peak antidepressant effect more quickly and returns back to baseline more suddenly. 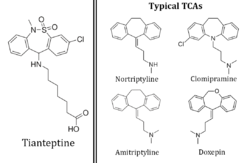 Tianeptine's structure compared to those of more typical TCAs. Note that tianeptine possesses more functional groups than the others, contributing to its unique pharmacological profile.

Unlike most prescribed antidepressants, tianeptine appears to have negligible direct effects on monoamines like dopamine and serotonin. Tianeptine slightly increases extracellular levels of dopamine, although it is not known how exactly it causes this release.[14]

Tianeptine also contributes to a significant increase in neuroplasticity through the modulation of glutamate and its receptors, most notably through the indirect modulation of NMDA receptors.[16] Such increases in brain plasticity have been linked to a significant reduction of stress and depression symptoms.[17] More recent studies have concluded that tianeptine is also an effective μ-opioid receptor agonist, which could contribute to its antidepressant and anxiolytic properties.[18]

It is also sometimes used to treat irritable bowel syndrome or asthma.[19][20]

The toxicity and long-term health effects of recreational tianeptine use have not been studied in any scientific context, and the exact toxic dosage is unknown.

The LD50 of tianeptine has not yet officially been established; however, it seems to have a large therapeutic index and margin of safety. In 2007, a 26-year-old man committed suicide by taking an excessive amount of tianeptine in combination with alcohol.[24] However, the amount required to overdose is not likely to be taken on accident. To ensure safety while using tianeptine, it is advised to not exceed 100 mg in a single dose or 300 mg total in one day.

The chronic use of tianeptine can be considered as mildly addictive and is capable of causing both physical and psychological dependence. When physical dependence has developed, withdrawal symptoms may occur if a person suddenly stops their usage.

Tolerance to many of the effects of tianeptine develops with prolonged use, including therapeutic effects. This results in users having to administer increasingly large doses to achieve the same effects. After that, it takes about 3 - 7 days for the tolerance to be reduced to half and 1 - 2 weeks to be back at baseline (in the absence of further consumption). This compound may share a cross tolerance with other trycyclic antidepressants and opioids.

It is worth noting that because of tianeptine's short duration of effects, it may compel some to frequent redosing. The potential euphoric effects of high doses (> 100 mg) may cause some users to exceed recommended dosages, which could quickly raise tolerance and intensify negative side effects. In addition, tianeptine possesses certain properties as a μ-opioid agonist, possibly leading to addiction and withdrawal mechanics similar to that of opiates.[25] However, as with most people looking to discontinue their antidepressant medications (both SSRIs and TCAs), daily users of tianeptine should taper off their usage instead of suddenly halting it. This will ensure that negative discontinuation symptoms are kept to a minimum.

Tianeptine withdrawal can occur with as little as ~500mg per day, and increases in severity with the amount of daily dosage and time spent using the drug. Withdrawal symptoms are similar to opioids (flu-like symptoms, watery eyes, and nose, dry heaves et al.) and may include emotional instability. However, the withdrawal of this substance can potentially be significantly stronger compared to opioids.

Tianeptine is available by prescription in many European, Asian, and South American countries and distributed under brand names such as Stablon and Coaxil.