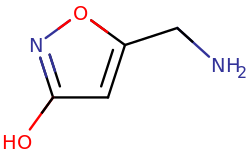 The structure of muscimol, a naturally occurring GABAergic hallucinogen.

GABAergic hallucinogens are substances that produce hallucinogenic effects such as perceptual changes, visual distortions, hallucinations, and bizarre behaviors via their activity at GABA receptors, which are typically associated with central nervous system depressants such as alcohol or benzodiazepines. These hallucinations and behavioral changes are likely a result of GABAA-ρ agonism; however, the precise mechanism is poorly understood.[citation needed]

The most well known of these substances are Z-drugs like zolpidem (Ambien) or zopiclone. Fly agaric mushrooms (Amanita muscaria) contain muscimol, which is a GABAergic hallucinogen.

These are general effects commonly expirienced on GABAergic hallucinogens.

The following 5 pages are in this category, out of 5 total.