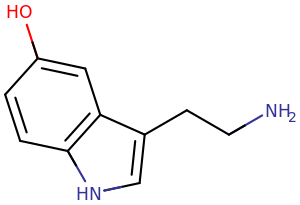 Skeletal formula of a serotonin molecule.

Serotonin (also known as 5-hydroxytryptamine, or 5-HT), is a naturally occuring chemical found in humans, animals, and plants alike.

It is commonly referred to as one of many "happy hormones" amongst dopamine, oxytocin, and endorphins, these chemicals bring about feelings of happiness and wellbeing (although this is a major oversimplification).

Approximately 95% of the human body's serotonin is produced in the intestines, where it has been credited with effects related to hormonal, autocrine, paracrine, and endocrine actions. [3] What is not absorbed elsewhere in the body is synthesized into serotonergic neurons for use by the central nervous system or CNS, here the serotonergic neurons can regulate: sleep, appetite, sexual behavior, homeostasis/temperature regulation, pain, and cognition.

Serotonin also affects pathological states such as: disorders connected to mood, anxiety, psychosis and pain.[4] Having either too little or too much serotonin can have many negative effects.

In the blood, it serves as a vasoconstrictor, and could be attributed as the cause of vasoconstriction in most serotonergic drugs.[citation needed] 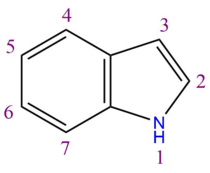 This monoamine chain can be found in many neurotransmitters, including histamine, dopamine, adrenaline and noradrenaline. It is also found in many drugs, e.g. tryptamines and phenethylamines.

Serotonin is synthesized from the α-amino acid tryptophan, which is hydroxylated into the metabolic intermediate 5-Hydroxytryptophan (5-HTP) and then decarboxylated into serotonin. This process requires the co-enzyme vitamin B6.[citation needed]

A serotonin full agonist is a chemical that binds to and activates a serotonin receptor and triggers a response, displaying full efficacy at that receptor.

A few psychedelic drugs are full agonists of the 5-HT2A receptor; among them are 25I-NBOMe and Bromo-DragonFLY.

A serotonin partial agonist is a drug that binds to and activates a serotonin receptor, but only has partial efficacy at the receptor relative to a full agonist.

Most classical psychedelic drugs are partial agonists of the 5-HT2A receptor; among them are LSD, psilocin and mescaline.

A serotonin inverse agonist activates a serotonin receptor but has the opposite pharmacological effect. Inverse agonists trigger a specific response from a receptor, whereas antagonists inhibit the activity of the receptor.

A serotonin releasing agent is a drug that induces the release of serotonin from the presynaptic neuron into the synapse, leading to an increase in the extracellular concentrations of serotonin.

Many antipsychotics such as, haloperidol or quetiapine and anti-emetics are serotonin receptor antagonists. One example is galanolactone, a chemical found in ginger, that acts as an anti-emetic via its action as a 5-HT3 antagonist.

Extremely high levels of serotonin can cause a condition known as serotonin syndrome, which possess both toxic and potentially life threatening effects.

Serotonin syndrome, also known as serotonin toxicity, is not known to occur naturally without the introduction of a pharmaceutical or supplemental agent. However, serotonin syndrome is known to develop from naturally occurring compounds such as St. John's Wort, a treatment for depression, due to its similarities to already existing antidepressants. Excess amounts of serotonin in the brain is primarily caused by the concurrent use of two or more serotonin acting drugs.[5]

An example that may result in serotonin syndrome would include taking two antidepressants in combination such as Escitalopram (Lexapro) with Duloxetine (Cymbalta), since both drugs act on some of the same receptors they may cause serotonin syndrome.

Another example would be taking a prescription antidepressant in combination with an over the counter cough suppressant such as dextromethorphan.[6][7]The number of possibly dangerous combinations are numerous. If you are currently taking an antidepressant or are considering taking a new substance, ensure that no dangerous interactions exist.