MDA (3,4-methylenedioxyamphetamine), also known as tenamphetamine (INN), or with the street name "Miley", "Sass", or "Sass-a-frass", is a psychedelic and entactogenic drug of the phenethylamine and amphetamine chemical classes. It is mainly used as a recreational drug, an entheogen, and a tool in use to supplement various types of practices for transcendence, including in meditation, psychonautics, and as an agent in psychedelic psychotherapy. It was first synthesized by G. Mannish and W. Jacobson in 1910. There are about 20 different synthetic routes described in the literature for its preparation.

MDA is said to share the entactogenic effects of MDMA. While it is generally similar to MDMA, users report that MDA has more stimulant and psychedelic qualities and slightly less intense entactogenic effects than MDMA. MDA is also considered less predictable than MDMA, with effects varying greatly from person to person. However, no properly controlled experiments have compared these drugs in humans. MDA was best known for its enhancement of the experiences of dancing and sex. 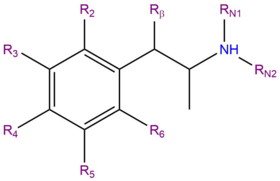 MDA, also known as 3,4-methylenedioxyamphetamine, is part of the phenethylamine and amphetamine families. There is a methylenedioxy ring attached to carbons R3 and R4, as well as methyl chains at Rα and RN.

MDA is thought to be similar in pharmacological mechanism of action and phenomenological effects to its more widely used N-methyl analog, MDMA. MDA acts as a releasing agent of the neurotransmitters known as serotonin, dopamine and noradrenaline, which are the neurotransmitters in charge of pleasure, motivation and focus. This is done by inhibiting the reuptake and reabsorption of the neurotransmitters after they have performed their function of transmitting a neural impulse, essentially allowing them to accumulate and be reused, causing physically stimulating and euphoric effects. The effect on serotonin may explain the similar euphoric and empathogenic effects of the two compounds MDMA and MDA. However, (S)-MDA has a higher efficacy in stimulating the 5-HT2A receptor than (R)-MDMA; thus MDA tends to cause more psychedelic-like effects, such as visual hallucinations. MDMA can also produce psychedelic-like visual effects, though these are generally less pronounced than those of MDA, or require a heavier dose to become apparent.

The body high of MDA can be described as a moderate to extreme euphoric tingling sensation that encompasses the entire body. It is capable of becoming overwhelmingly pleasurable at higher dosages. This sensation maintains a consistent presence that steadily rises with the onset and hits its limit once the peak has been reached.

This is accompanied by a powerful enhancement of the pleasure derived from tactile sensations such as touching, hugging, kissing and sex.

In terms of its effects on the users physical energy levels, MDA is commonly considered to be extremely stimulating and energetic even more so than its counterpart drug MDMA. This encourages activities such as running, climbing and dancing in a way that makes MDA a popular choice for musical events such as festivals and raves.

The particular style of stimulation which MDA presents can be described as forced. This means that at higher dosages it becomes difficult or impossible to keep still, as jaw clenching, involuntarily bodily shakes and vibrations become present, resulting in an extreme unsteadiness of the hands and a general lack of motor control.

A person's eyeballs may even begin to spontaneously wiggle back and forth in a rapid motion, causing vision to become blurry and temporarily out of focus; a condition known as nystagmus.

Dehydration is a universal experience with MDA and a product of increased heart rate and the extreme motivation to engage in strenuous physical activities that it induces.

At moderate to high dosages, this substance often results in an overall difficulty when it comes to urination, an effect that is completely temporary and harmless, due to MDA’s promotion of the release of anti-diuretic hormone (ADH). ADH is responsible for regulating urination. This effect can be lessened by simply relaxing but can be significantly relieved by placing a hot flannel over the genitals to warm them up and encourage blood flow.

The visual effects of MDMA have an occurrence rating that is more selective and less consistent than any of the traditional psychedelics. This is to the point where many people disregard psychedelic experiences with MDMA as a "myth" or "rumour" but this is simply because they have not experienced it for themselves. The effects can never be guaranteed to manifest themselves but are more likely to occur with chemically pure high dose MDMA experiences, towards the end of the experience and if the user has been smoking marijuana. They are also more likely to occur if the user has prior experience with psychedelics but remain entirely possible within those who have never tried one for themselves.

MDA presents a complete array of visual enhancements which are mild in comparison to traditional psychedelics such as LSD or Psilocin even at higher dosages but still distinctively present. These effects generally include:

MDA presents a small array of visual distortions which are mild in comparison to traditional psychedelics such as LSD or Psilocin even at higher dosages but still distinctively present. These effects generally include:

The visual geometry that is present throughout this trip can be described as more similar in appearance to that of Psilocin than LSD. They can be comprehensively described as structured in their organization, organic in geometric style, intricate in complexity, large in size, fast and smooth in motion, mostly blue and grey in scheme, glossy in colour, equal in blurred and sharp edges and equal in rounded and angular corners. At higher dosages they are significantly more likely to result in states of Level 7A visual geometry over Level 7B. Many users almost menacing feeling, following a sinister and ominous style with a colour scheme that generally consists of greys and blues.

MDMA produces a unique range of high level hallucinatory states in a very unique style. These effects include,

The external hallucinations which MDMA induces usually follow themes of memory replays and semi realistic expected events. For example people could be casually holding objects or performing actions which you would expect them to in real life before disappearing and dissolving under further inspection. Common examples of this include seeing people wearing glasses when they are not and mistaking objects in the peripheral vision as human beings. At higher dosages however they are capable of becoming constant in their presence and almost entirely delirious in their nature.

The internal hallucinations which MDMA induces are only present as spontaneous breakthroughs at extremely high dosages. The most common way in which they manifest themselves are through hypnagogic scenarios which the user may experience as they are drifting off to sleep after a night of use, these can usually be described as memory replay from the previous several hours. These are short and fleeting but frequent and completely believable and convincing as they happen. In terms of the theme they often take the form of conversations with the people who were with you or instead manifest themselves as bizarre and extremely nonsensical plots.

The experience of auditory hallucinations on MDMA is extremely common, usually occurring at the end of the night, and almost always consisting of memory replays from the previous several hours. They are commonly manifested as spontaneous clips of the music that was played and garbled voices of the people that were spoken too. These can become as loud in volume as the level of noise heard at any rave or house party and can occasionally become complex enough to manifest themselves as intricate, previously unheard and completely coherent songs or symphonies of any style.

MDA also differs from its methylated cousin MDMA in its acute toxicity—it is clearly more toxic, with toxicity indicative of overstimulation of the central nervous system and the cardiovascular system.[1] Symptoms of acute toxicity may include agitation, sweating, increased blood pressure and heart rate, dramatic increase in body temperature, convulsions, and death. Death is usually caused by cardiac effects and subsequent hemorrhaging in the brain (stroke).[2] The website erowid.org lists the fatality rate at roughly 2 in 100,000 users, assuming it has similar rates as MDMA.[3]

MDMA should not be taken alongside any SSRI, RIMA or MAOI drugs, due to the risk of serotonin syndrome.

The median lethal dose (LD50) in mice has been reported as 92 mg/kg by intraperitoneal injection. This puts the estimated fatal dosage for a 60kg human being at 5520mg although it should be noted that toxic side effects can be triggered well below this amount.

MDA usage forms a tolerance. MDA can be taken multiple days in a row, but a higher dosage will need to be administered each consecutive day. Eventually, positive effects will not be noticed as negative side effects increase. MDA has mild psychological addictive potential.