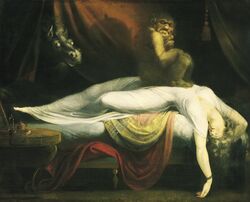 The Nightmare, by Henry Fuseli (1781) is thought to be one of the classic depictions of sleep paralysis perceived as a demonic visitation.

Sleep paralysis is a naturally occurring transition state of the body, in which, either when falling asleep or awakening, the skeletal musculature is temporarily paralyzed. This happens in order to prevent the sleeper's body from moving during dreams. This process can be accompanied by hallucinations. Usually, the paralysis disappears once the dreamer is awakening.

It can occur at sleep onset (Hypnagogia) or upon awakening (Hypnopompia), and it is often associated with terrifying visions and external hallucinations (e.g., an intruder in the room or a demon sitting on one's chest) to which one is unable to react due to paralysis. It is believed to be a result of disrupted REM sleep, which is normally characterized by a complete loss of muscle control that prevents individuals from acting out their dreams.

Many people find sleep paralysis to be a horrific and negative experience due to the hallucinations to which they cannot react, but it can usually be escaped by simply changing the rhythm of one's breathing. When one changes their breathing pattern, such as holding one's breath or breathing much more deeply for roughly 15 seconds or more, the body will likely notice the change and exit sleep paralysis. One can also attempt to escape sleep paralysis by moving minor limbs such as fingers or toes. Some anecdotal evidence suggests that trying to move your head/neck is the easiest route out.[citation needed]

In the isolated cases of experience lucid dreams with very good dream recall, some claim to be able to manipulate their sleep paralysis, creating characters and landscapes much like they could in a dream. This could potentially be due to the fact you are still partially in a dream during sleep paralysis, which causes the hallucinations.